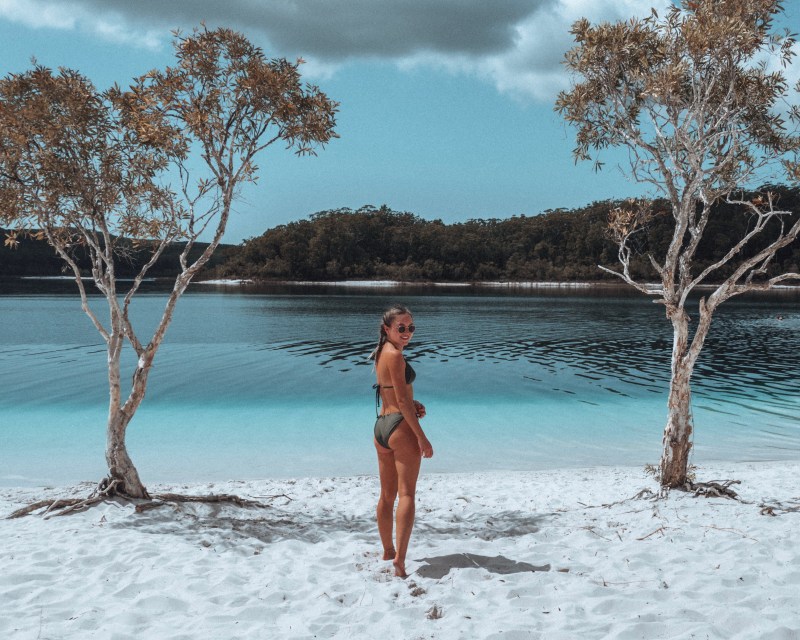 I spent last weekend on K’Gari, which you might know as Australia’s Fraser Island. It’s the largest sand island in the world, the only place where a rainforest grows on sand and it’s the second most easterly point of mainland Straya! Phew. What a place! K’Gari is only accessible by four wheel drive. It’s beautiful, secluded spots are best explored with someone who knows the island well, so with that in mind I decided to join a tour.

Usually organised fun is not particularly my thing and I prefer to explore uninhibited by an itinerary, but in this case I put my trust into the hands of RatPack Travel and it was amazing. Having booked multiple campervans via Sammy at RatPack, I had lots of faith in his judgement and ability to sense the kind of vibe I might be after. He totally nailed it with a two night wilderness camping tour that included getting behind the wheel of the 4WDs, swimming in the most pristine fresh water and learning all about the aboriginal heritage of the island.

You can book the tour I went on here and use BETH10 for a cheeky discount!

The campsite was more basic than I had initially expected but we were so busy around the island that it really didn’t matter! This tour is the only one left to set up camp in the national park; we were surrounded by beautiful nature and just steps away from the beach for sundowners, before falling asleep to the sound of the waves. In the evening, after a hearty meal, some of us bonded over giant jenga and a few bags of goon as the stars shone brightly up ahead. We had the tent upgrade which meant a proper bed and heavy duvet rather than a mat and sleeping bag and I’d suggest it’s worth every cent if you value your sleep as much as I do! Much to my surprise, I slept so well and deeply, which is just as well because alarms were early!

The view from right by my tent!

Waking up to a didgeridoo outside your tent at 06:30am may not be quite your idea of a relaxing weekend away, but it did mean that our group was often the first to the island hotspots. The guide did such a stellar job of avoiding the other tours including the crowds of day trippers, so often we had some of the best bits like the Champagne Pools almost to ourselves!

The food was excellent and I can’t believe it was all prepared en masse to feed the entire tour out of a camp kitchen. There was plenty and the BYO policy means the whole atmosphere feels really relaxed; there’s no need to spend anything once you’re on the tour (unless you fancy a gorgeous handcrafted boomerang to take home)! Driving the 4WDs is totally optional, as long as you’re over 21 and have had a license for over a year, but most people were keen and it was so much fun. I absolutely loved driving on the sand. At points we were cruising down the beach, windows down, with dolphins riding the surf alongside us.

Marine life was in abundance; we climbed the short hike up Indians Head where we listened to the aboriginal history of the island whilst watching stingrays, eagle rays, turtles and even humpback whales in the water below. Of course, we also saw the islands most famous resident; the dingo. Dingo safety is not to be scoffed at and we were very well informed, so from the safety of our cars we enjoyed watching a mother and her new pups play on the beach!

In terms of things to see and do, K’Gari has it all. We walked through the jungle, swam in a tea tree lake and learnt to throw a boomerang on a massive sand dune. That was just the first afternoon! If you’ve ever seen photos from K’Gari that look almost too good to be real, that will be Boorangoora (otherwise known as Lake McKenzie). The crystal clear, refreshingly cool water was absolutely breathtaking. It’s also a very sacred site for the aboriginal people.

One of the things I was most impressed about from the tour was the focus on learning about aboriginal culture. It’s why it’s so important that we honour and respect it by using the proper names, rather than anglicised versions from the mouths of colonisers.

After the tour, we did what we usually do and tried to list things we thought they could have improved. We honestly didn’t get any further than perhaps an extra half an hour in bed (ha!) but even that was a reach. Honestly, my only wish was that we could have stayed longer.

If you love the look of K’Gari and the sound of the tour, but camping isn’t for you, then they also have a really beautiful glamping site and hostel. I had a peak into some of the en-suite(!) double tents and they’re nicer than most hotel rooms!

As much as I love to wing it, I would definitely recommend booking your K’Gari tour in advance, especially in peak season. This tour only runs a few times a week and is super popular; I’ve learnt the hard way with missing out on my preferred dates for other east coast activities! Sammy drafted me a free RatPack calendar personalised to our road trip and from this we were able to lock in ideal K’Gari dates, and make time for everything else too!

You can book the exact tour I took here!