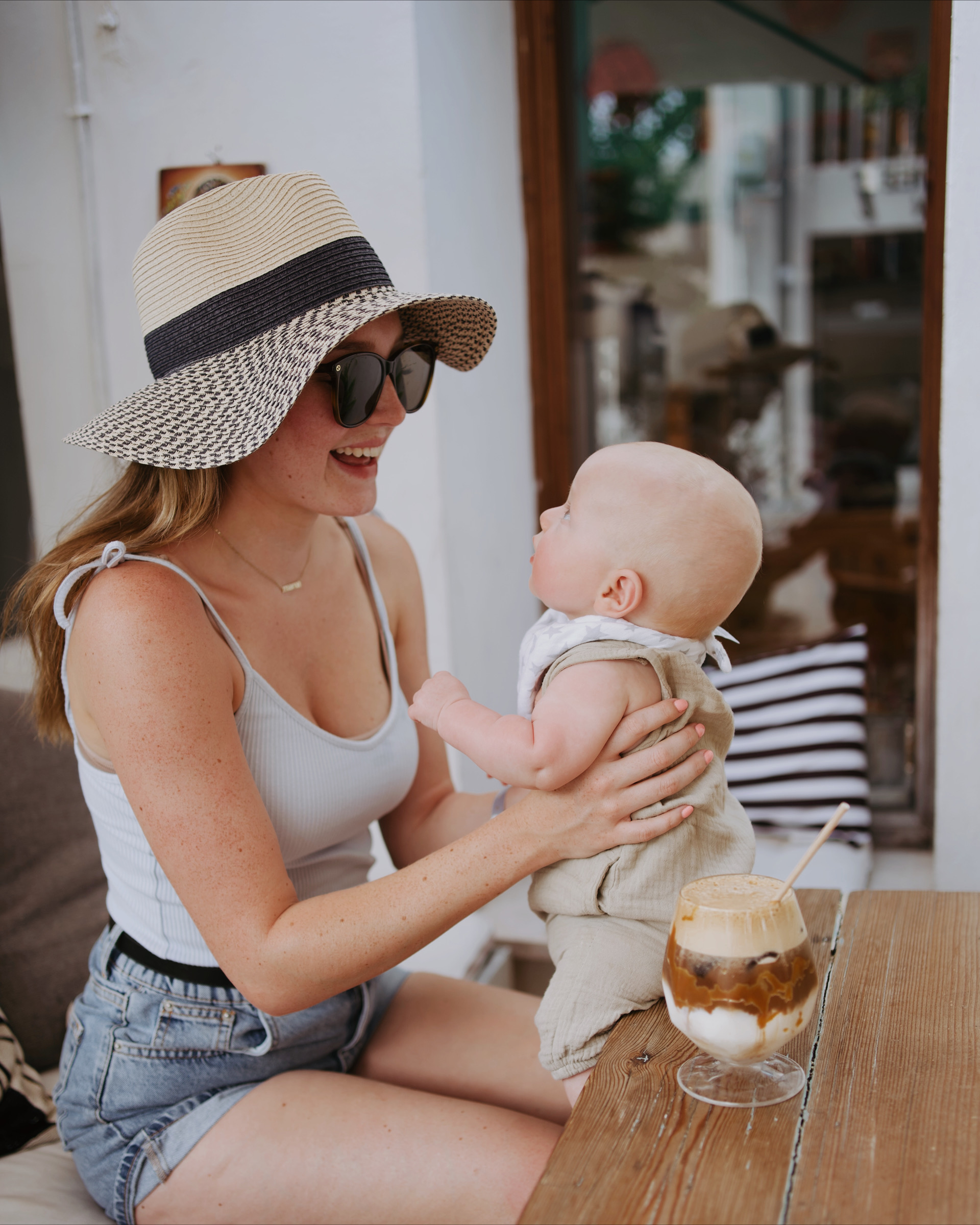 Last September we travelled to the beautiful island of Cyprus for our first family holiday. Our baby was just five and a half months old and it was our first travels after pandemic lockdowns too, so we wanted somewhere not too far from home with guaranteed sunshine and a relaxed pace of life. A package holiday felt like the obvious way to go, both for pandemic peace of mind and ease and comfort. The TUI Sensatori Aphrodite Hills by Atlantica was perfect and we spent two brilliant weeks unwinding.

This trip was in part a press trip with TUI – AD

Paphos is a four hour flight from the UK. We flew with TUI from London Gatwick and had a very smooth journey with impressive management of social-distancing policies when boarding and disembarking row by row from the aircraft. As a young family, we were boarded first and the crew ensured we were comfortable with the infant seatbelt and had anything else we might need for the flight. We took our Babyzen YOYO 2 pushchair right up to the plane doors then stowed it in the overhead locker – a godsend!

The TUI Sensatori Aphrodite Hills Resort is a really short transfer from Paphos Airport, taking around 10 minutes by car or bus. We asked for a carseat as part of our package booking.

Upon arrival at the resort you’re greeted by a grand lobby and a friendly team. We were given cold water and towels whilst our luggage was taken to our room, where any baby items we had pre-requested were ready and waiting.

There are a range of deluxe double, family and swim up rooms at the TUI Sensatori Aphrodite Hills, as well as accessible ones too. We stayed in a ‘Swim Up Deluxe Double with Sea View, Golf View and Terrace’; we’d hoped that this would give us the opportunity to lounge by the pool or sit on the terrace whilst the baby slept. Spoiler: the baby didn’t sleep – ha!

The rooms are classic, clean and bright with all the modern touches you’d expect from a luxury hotel. Each has a balcony or terrace, flat-screen TV, good Wi-Fi, air-con and a separate bath and shower as well as robes, slippers and tea and coffee facilities.

In hindsight, we should have booked a family room as these feature an area separated by sliding doors to sleep children. We didn’t use the swim up pool nearly as much as we anticipated, partly because it was quite cold but mainly because we really liked the atmosphere (and cocktails!) by the main pool.

A travel cot was provided as well as towels for the baby and a steriliser machine.

The TUI Sensatori approach is that you can indulge in as much or as little as you want while on holiday. As such, there’s plenty on offer but you’re also very welcome to take life at your own leisurely pace without being fussed either. Having previously visited an all-inclusive destination where ‘reps’ hassled you to join in with pool-side games, this laid back approach was really appreciated.

The resort is large and expertly laid out. At it’s heart is a large multi-level swimming pool with plenty of room to float, paddle or do lengths if you wish. There’s a trendy poolside bar serving all-inclusive cocktails, beers and other beverages and another for hot and cold snacks, pizzas, kebabs and ice cream. In addition, there’s a children’s splash zone and an adult only pool with it’s own bar and sunbathing area. All three pools are beautifully separated so that each holiday-maker can enjoy their own preference without bothering, or being bothered by, anyone else.

September is of course outside of school holidays so the resort was quieter, with more couples, small groups and young families. Whatever the time of day we never struggled for loungers!

There’s a gym, fourth pool for exercise and fifth where water activities and classes are hosted. You can book plenty of free (and paid) activities on the app, from sunrise yoga on a platform overlooking endless blue sea to tennis, archery and organised family games. The TUI Sensatori Aphrodite Hills by Atlantica also features a large championship golf course.

The atmosphere at the resort was friendly but unintrusive, from the staff to the other guests. Most of the guests were European and many of those from the UK but thankfully, there was no ‘Brits abroad’ vibe!

There are nine restaurants that you can dine at in total at the TUI Sensatori Aphrodite Hills – four of which are included in the all-inclusive package, with the addition of the snack bar too. As foodies, eating in the same places across a two week stay was definitely the part we were most apprehensive about.

We need not have worried though; the only time we ate the same thing more than once was when I developed a hankering for the chicken teriyaki at the Jasmine (Asian a la carte) restaurant and my husband delighted in free-range access to fresh pancakes for breakfast!

Eleonas, the main buffet, is incredibly extensive. At breakfast, lunch and dinner there was loads of variety with daily-changing menus, Cypriot specialties and a kids area. The food was tasty and fresh and we never got bored because it was almost impossible to run out of choice.

We also dined at each of the speciality restaurants which are included in the all-inclusive package (number of visits dependant on number of nights). Our favourite was definitely the Jasmine restaurant where you could indulge in a three course Asian-fusion meal, including fresh sushi platters! The poolside Mexican, El Sabor, is open for lunch and dinner and has a fun, laid back feel. We were less keen on the Fig & Olive restaurant, which served an Italian and Mediterranean menu, because the food felt a bit basic by comparison.

If we couldn’t be bothered to leave our loungers for lunch or fancied a snack between meals, the pool-side snack bar offered delicious pizzas, kebabs, fruit smoothies, cakes and sweet and savoury crepes amongst other items.

We also ate in two of the ‘Village Square’ restaurants which makes a nice change; the traditional Pithari Taverna was particularly good and had a lovely atmosphere too.

Anyone who goes on holiday with their children deserves to enjoy a bit of peace without them too, if they wish! We didn’t go intending to use the BabyClub (nursery) as our son was just under six months old and hadn’t been left with anyone else before. However, when we had a look around the children’s facilities and met the staff we were so enamoured – as was he – that we decided to book some afternoon sessions. It was bliss all round. We floated around the pool with a cocktail for a few hours safe in the knowledge that he was happy and well-tended to in a comfy air-conditioned nursery. He even came home with a folder of artwork!

The BabyClub caters for little ones from 0-3 while the Kids’ Club supervises 3-12 year old across a range of age-appropriate sessions and activities. There are even evening clubs for kids from films to discos so that you can enjoy an adult meal.

All the childcare staff at TUI resorts have been trained to British standards and follow UK protocols for adult-child ratios and care too.

The TUI Sensatori Aphrodite Hills Resort features a separate pool and splash zone for children with slides and water features, toddler paddling areas and even loungers and a bar for supervising parents.

TUI Sensatori Aphrodite Hills is part of a large Aphrodite Hills complex about thirty minutes from Paphos. As well as the resort, there are lots of privately owned villas, the golf club and a large spa (with an amazing infinity pool – hotel guests get a discount here.) There’s a supermarket, pharmacy, car and bike rental, Costa coffee and four restaurants. This area is known as ‘The Village’ though it is worth noting that it’s essentially an extended holiday complex. It means you’ve got everything you need a short stroll away, though it is worth noting that for anything else, such as more cultured exploring, you’ll need to either hire a car, take a bus (cheap and easy) or arrange an excursion.

We took the local bus to Paphos from a stop right outside the hotel. It only cost a couple of euro and was air-conditioned and comfy. We enjoyed seeing the little villages en route and spent a nice morning wandering around Paphos Old Town. It’s not the most happening city but is very charming and easy to navigate. You can also take a bus to Coral Bay, a popular white sand beach.

There are plenty of excursions that you can either arrange through TUI or self-drive such as Aphrodite’s Rock, several large archaeology parks, Watermania water park and other local beaches, towns and villages. We hired a car and drove to Aiya Napa, where my brother and his girlfriend were conveniently simultaneously holidaying!

If you’d asked me what kind of travellers we are, I would’ve happily said we’re not ‘package holiday people’. What I learnt from this trip is that there’s a package holiday for everybody! Broken down, it just means that your travel and accommodation are booked with one provider. This offers so much peace of mind (TUI had the most stellar cancellation policy I saw during the pandemic) and total ease too. We were more than pleasantly surprised by the quality and variety that all-inclusive offered and it made our first family holiday a breeze when it came to not having to think about anything.

We stayed for 14 nights, but 10 would have been perfect. The September weather was idyllic; warm and sunny but not too humid with a gentle sea breeze. It also offered the right levels of atmosphere and crowds.

I think we really embraced the Sensatori mindset; most days we did a little – a swim, a doze in the sun, a wander around the beautiful resort – others we adventured and sought culture. We talked multiple times about how we would definitely do this kind of holiday again in the future as our family grows (perhaps we’ll take the grandparents for an extra pair of hands by the pool too…)