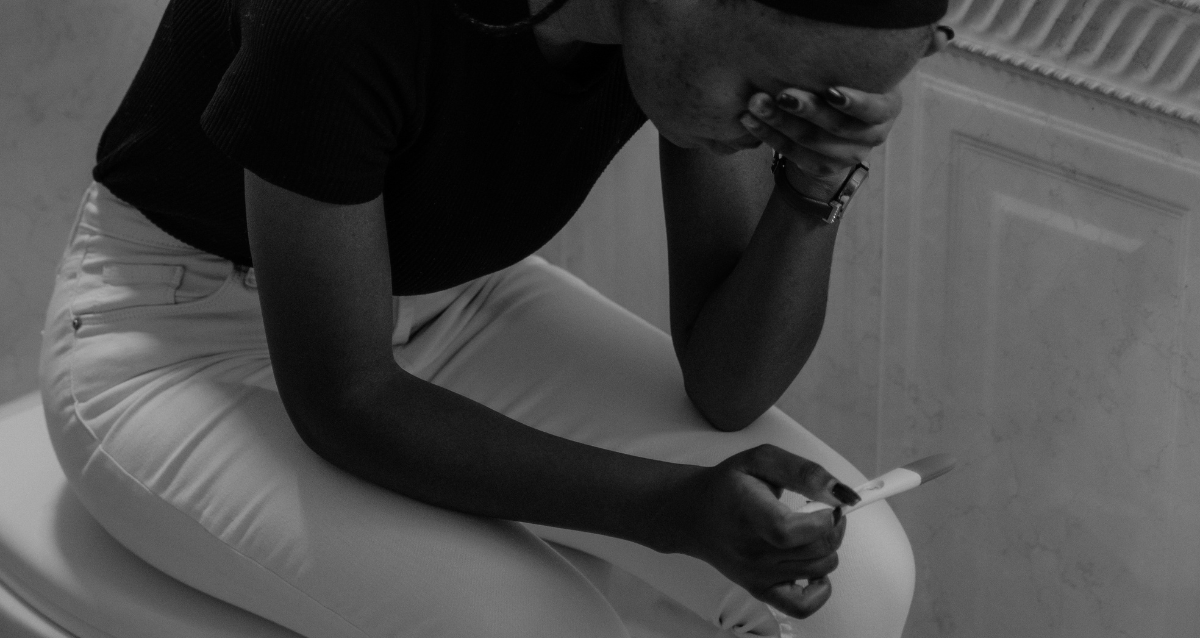 When Francesca found out she was pregnant she was elated. But amongst the dreaming about cute outfits and Pinterest-worthy nurseries, she knew in her gut that something wasn’t right. The next two months were tumultuous as she felt stripped of her motherhood status. The pregnancy ended but she still doesn’t really know why. In this brave and honest piece she tells us her pregnancy loss story: not a miscarriage, not an ectopic, not a Mama.

SUGGESTED: My Unplanned Pregnancy Was Ectopic

Two pink lines appeared on a Sunday morning. I say two, but the second line was so faint that my husband thought I was imagining it. I tested like crazy over the following week. It got darker and when I took a digital test the word ‘pregnant’ popped up.

“Congratulations, Mummy!” Said the midwife after I referred myself to maternity services via my GP. I was a mummy.

Still, in my gut, something didn’t feel right.

Nothing felt ‘enough’. The lines on the test, my symptoms, my gut feeling. Still, I chose to block it out and let myself feel excited. We celebrated the news with my parents immediately. We Googled and researched, already looking at cute little outfits and browsing nursery inspo on Pinterest. We conjured up the little baby that would be joining us in the summer.

Monday came and so did the blood.

Something no pregnant person wants to see. In a panic, I called 111, who advised me to rest at home and see my GP. The GP recommended I just monitor the bleeding and take another test in a week. I returned to work after a couple of days, and started symptom spotting like crazy.

I was hunting for signs that it was okay. ‘Oh my boobs hurt, so I must still be pregnant!’ ‘Hmm, I think I just felt nauseous for half a second, so everything is obviously fine’.

Deep down, I knew that something still was not right.

This only became more confusing, when the following Monday, as instructed, I took another pregnancy test. That second line was indeed darker still and the digital test still said I was pregnant.

I called my GP to tell her the good news, but as I was still bleeding, she asked me to come in. The next 48 hours were a blur of abdominal examinations, swabs and samples and bloods taken and finally, an internal scan at the EPU.

The nurse couldn’t see anything. I was supposed to be around 6 weeks pregnant so she was looking for a sac, if not heartbeat. My uterus looked completely empty.

They thought perhaps my dates were off but I was given a leaflet titled ‘Pregnancy of Unknown Location (PUL)’ nonetheless, and a list of symptoms to look out for. I was warned that my pregnancy might be ectopic.

Two days later, I woke up to a lot more blood. I went straight to the EPU. On our arrival, we learnt that the HCG in my system had actually gone up, but not quite enough for them to be happy with. So, I had yet more bloods taken. When I phoned for my results later on, I was told that my HCG had now dropped quite significantly. They confirmed that my pregnancy was not viable. Still, there was no sign of where a baby might’ve been.

Over the next few weeks, I had multiple blood tests and urine samples taken to check that my HCG were lowering effectively. It’s a bizarre feeling, to go from desperately hoping for the numbers to go up, to desperately hoping for the numbers to go down just to get it all over with. Amongst all this stress, I also managed to get Covid. It was the loneliest, most frightening time of my life, and I couldn’t even see my friends or family!

After isolation, I returned to the EPU to check my HCG again. It had dropped, but still not enough. Honestly, from this point, the whole experience just feels like a hopelessly sad blur. I was pregnant, but not pregnant enough. My body clung on to symptoms: I was nauseous and had breakouts all over my face but by now I knew there wouldn’t be a summer baby wearing cute outfits or sleeping in their Pinterest nursery at the end of it.

The whole experience lasted 7 weeks; what should’ve been my whole first trimester.

My final EPU assessment was on New Years Eve. I spoke to so many nurses, midwives, doctors and consultants about what was going on, but none of them could tell me.

It wasn’t exactly a miscarriage, nor fully an ectopic. The most likely answer was that my body had absorbed the pregnancy. I was told that I was lucky I hadn’t had to have medical or surgical management. I felt far from it.

I battled devastation and loss whilst simultaneously feeling relieved. I just needed it to be over but inside, I was so confused.

READ NEXT: Pregnancy After Loss: Coping in the First Trimester