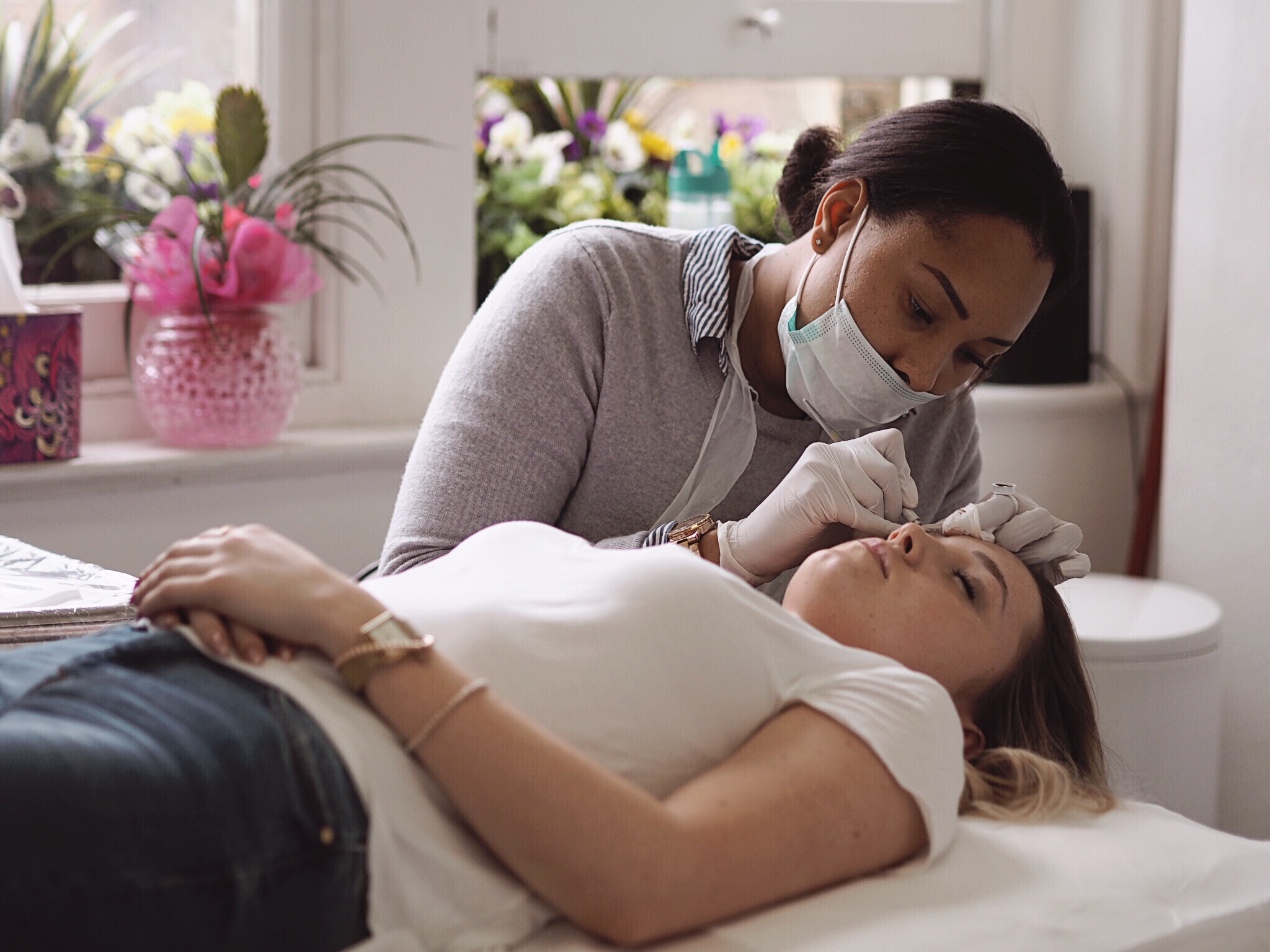 The quest for the perfect brow is very, very real. I blame Cara Delevigne. Eyebrows have the power to totally alter a face whilst simultaneously being a royal pain in the arse; something I mutter to myself as I try desperately to get them looking more like twins and less like distant cousins each morning, a £30 pot of pomade in hand. So when I was asked if I’d like to experience microblading at the renowned Sian Dellar Clinic on Harley Street, I jumped at the chance. I didn’t know that much about the procedure, other than that it would mean I’d wake up every morning with brows on fleek and that was more than enough to convince me.

Microblading is a semi-permanent brow treatment that uses a very, very fine little blade made up of what are essentially nine pins to deposit pigment into the skin. Unlike tattooed make up, there are no machines or needles involved and the overall effect is much more natural looking. The treatment is carried out completely by hand after an in-depth consultation, which means that hair-like strokes can be strategically placed in ‘real’ looking directions, lengths and positions. The tiny blade essentially scratches the skin, leaving behind the colour.

This is the number one question I have been asked, and the number one question I wanted answered before I went to my first appointment. Everyone has a different pain threshold – I’d say I sit somewhere around the middle of the scale, though I have been known to cry when I hit my funny bone – but I was quite pleasantly surprised by how little pain I felt. Some numbing cream was applied beforehand, though honestly I didn’t feel it made any difference (again, this is rather down to you and your body) and the first 5-10 minutes of the procedure would be best described as ‘uncomfortable’. It was scratchy and a little annoying but it didn’t actually hurt and I was relieved to find that the scratches didn’t even sting. Once the initial layer had been done, Sian applied a second coat of numbing creamy and instantly I felt nothing but a slight prodding and poking around my brow area. If you’ve ever had your eyebrows threaded, the pain is nothing like that: I’d rather an hour of microblading than 10 minutes of threading.

How much does it cost?

The full microblading treatment at The Sian Dellar with Sian herself costs £595, which includes the consultation and first appointment and a top up appointment four weeks later. The initial outlay is the most expensive part and a top up a year later costs £295. To book in with one of the two other practitioners at the clinic, the cost is between £395 and £495. As with most things, I imagine prices will vary geographically!

How long does it last?

The treatment lasts about a year, some people choose to get the colour refreshed sooner whilst others wait longer. Because you don’t have to fuss over your brows every day, a lot of people find that microblading helps their natural brows to grow thicker and healthier in the process! 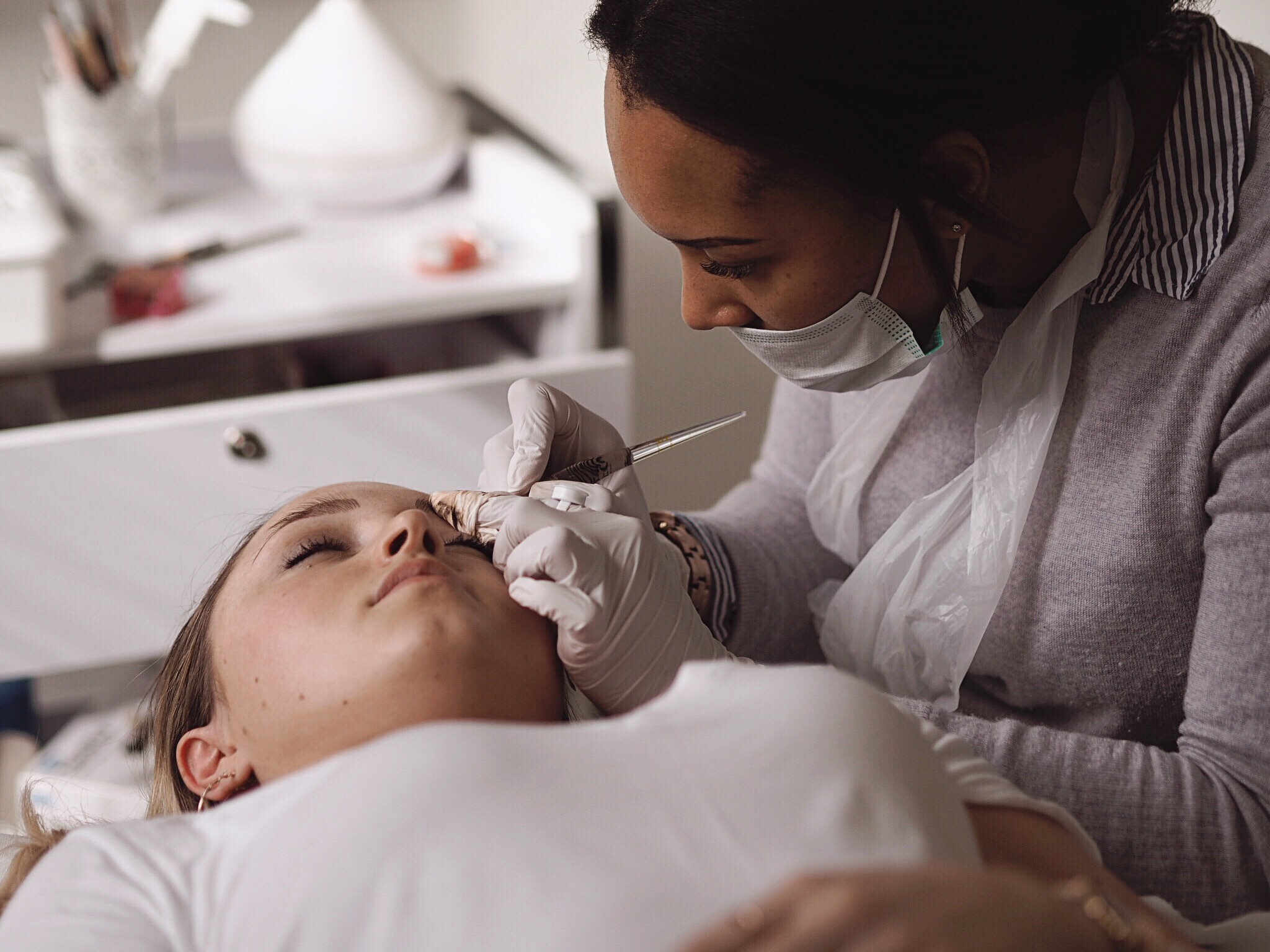 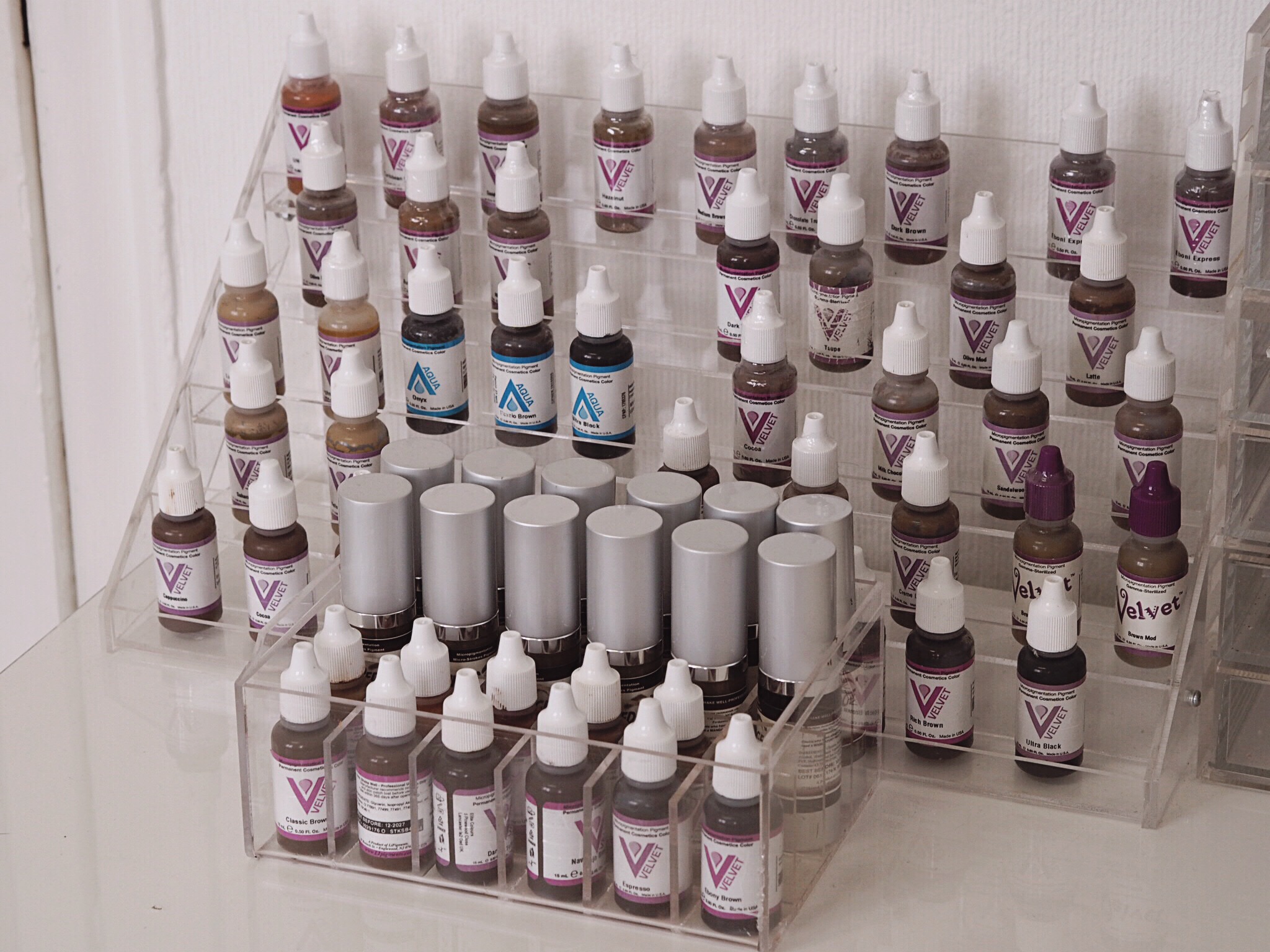 The range of pigments available; there is a shade to suit everyone

Any nerves I had were quickly dissipated; Sian made me feel completely at ease and I found that chatting to her both before and during the treatment helped to take my mind off of any potential fears. Just like any treatment, the more relaxed your body is, the more comfortable it will feel. We began by discussing my current brows vs. my dream brows; I wasn’t wearing any make up so I showed Sian some photographs of how I ‘do’ my eyebrows and I said that I wanted them to look ‘done’ without looking completely fake. Sian worked her eyebrow science and quickly measured and mapped out where my brows should begin and end, then drew them on in lots of detail and precision so that I could see exactly what the finished product would look like.

When the treatment began I was more surprised by the noise than the sensation. It’s akin to someone ripping paper very close to your ear, or a little like the sound that a fine tooth comb makes if you run it along your finger. As someone with sensitive eyes, the thing I actually found most uncomfortable was the bright light which made my eyes water (I cry at the dentist for the same reason – ha!). Once the initial stage was over, the skin was broken and the numbing cream re-applied I could’ve actually had a little nap. In fact, I think I probably did because the appointment seemed to fly by. By far the worst moment, which thankfully lasts for maybe 20 seconds tops, was the application of the final layer of pigment. Oh my did that sting.

And just like that, after about 20 minutes or so, we were done. I sat up, was handed a mirror and genuinely gasped. I could not believe how incredible they looked, nor that they were actually MINE on MY face. Sian explained the aftercare process and I skipped on my merry way… 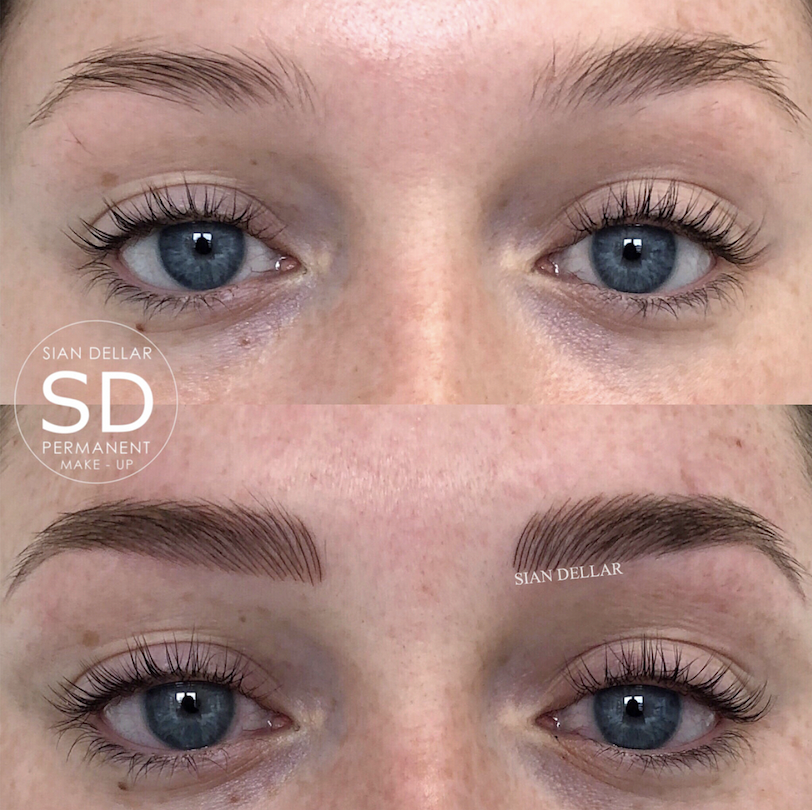 That afternoon, as the numbing cream wore off I got a bit of a headache and took a couple of ibuprofen. Making any kind of expressive brow movement felt quite uncomfortable; I had the girls round that evening and my catchphrase of the night was “Stop making me laugh!” I had been warned that for a few days after the appointment they would be dramatically dark and sent a full Aftercare 101 guide by the gals at Sian Dellar (it included Kim Kardashian memes sooo…) Sian really pressed just how important the aftercare is, in fact she said it’s as important, if not more so, than the treatment itself. She could do the most amazing job but if you don’t look after them religiously for those first 10 days then it’s worthless. No pressure.

Halfway through the recovery and I was finding the aftercare surprisingly easy. In fact, it is easy. Don’t get them wet, don’t touch them and apply coconut oil with a cotton bud 2-3 times per day to keep them hydrated. Simples. The most frustrating bit by far was being unable to give my face a quick wash; instead I used my usual cleanser and applied it avoiding my brows, then removed it with a muslin cloth or hot flannel. Every evening I used a baby wipe to very, very gently wipe my brows and remove any coconut oil build up or bacteria.

I had been warned that as they scabbed they were likely to flake but was pleasantly surprised by how limited this actually was. I hadn’t particularly been looking forward to walking around looking like I had gone mouldy. At around day 7-8 they began to scab which was a little itchy and I really had to resist the temptation to pick. Instead, I slathered them with my new BFF, coconut oil, and powered through.

My brows had healed and any scabbing had stopped, but I waited another couple of days before washing my face properly, just to be on the safe side. By this point they looked much lighter than what I wanted but thankfully Sian had warned me that this would happen, so I didn’t panic.

About two weeks after the treatment I felt like my brows were officially ‘done’ and I started cleansing my face as normal again. They looked amazing but I did find that with a full face of make up they weren’t quite as dark as I’d like, so I was applying a tinted brow gel. Having got used to my new set, I was really excited for my top-up appointment so that I could ask Sian to make them a little more dramatic.

This time there were no nerves because I was fully prepared for the treatment. I had read a few times that the top up appointment actually hurts more, but thankfully this turned out to be wrong in my case. Sian was really impressed with how well I’d looked after them (gold star for me) and I explained how I wanted them a little darker and perhaps a tiny bit fuller, now that I’d got used to the shape. The purpose of the top up appointment is to ensure that your brows have healed properly and that they are 100% what you want so if you’re looking into microblading then make sure you find a practitioner who includes this as standard. I was in and out in now time at all with solid 10/10 brows and another 10 days of aftercare (at which I am now a pro). 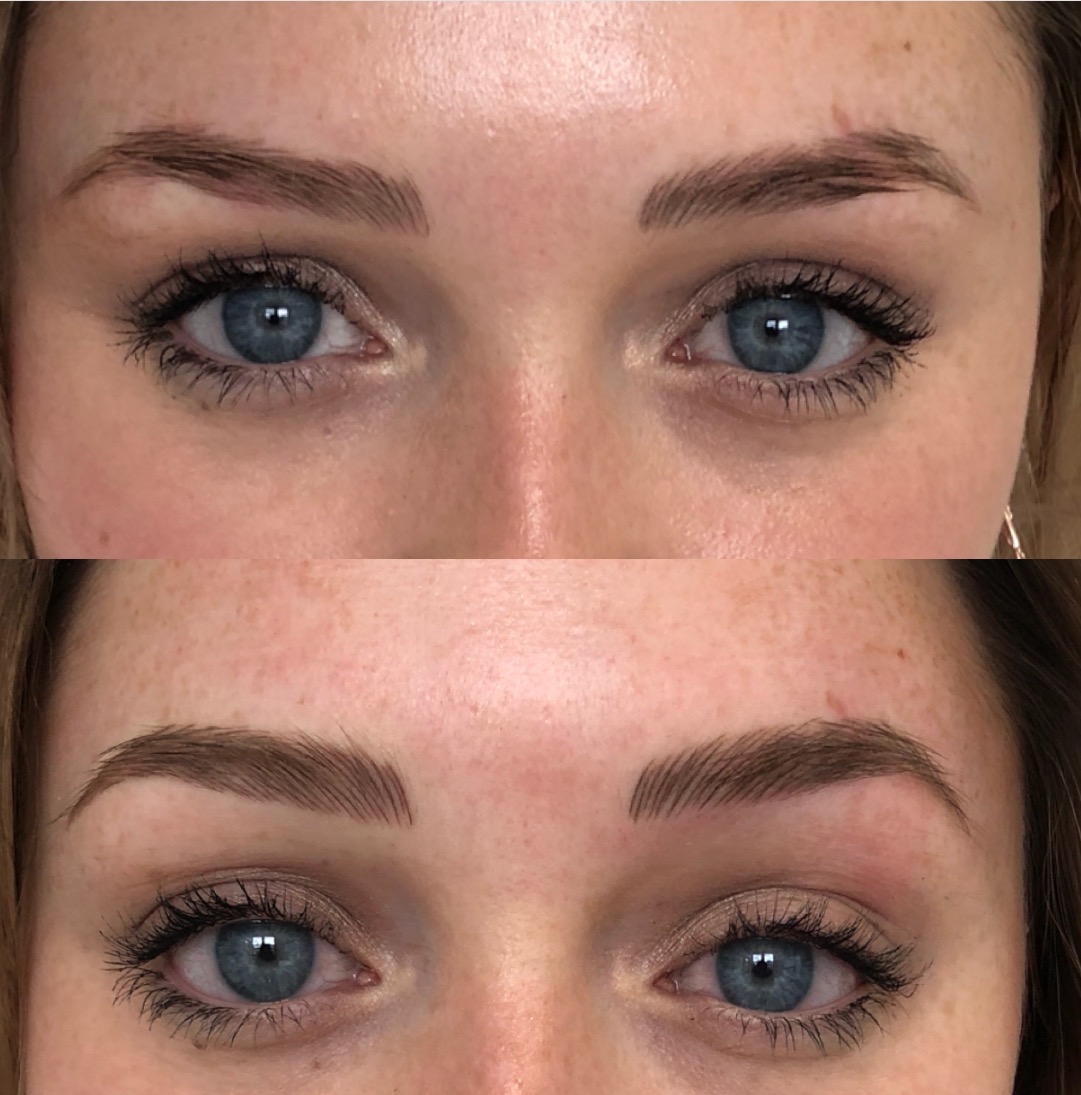 I am a total convert. The treatment is not cheap and I was grateful to be invited to try it out to share with you all, however I will absolutely be paying Sian to redo them in around a years time. They are an investment but the time (and money on products, waxes and tints) it saves is well worth it in my eyes. I would absolutely recommend The Sian Dellar Clinic; they were incredibly professional, the clinic itself is clean and relaxing and I felt well looked after and completely informed the whole time. Plus, they sent me Kimmy K memes and  the proof is in the pudding: just look at my brows! 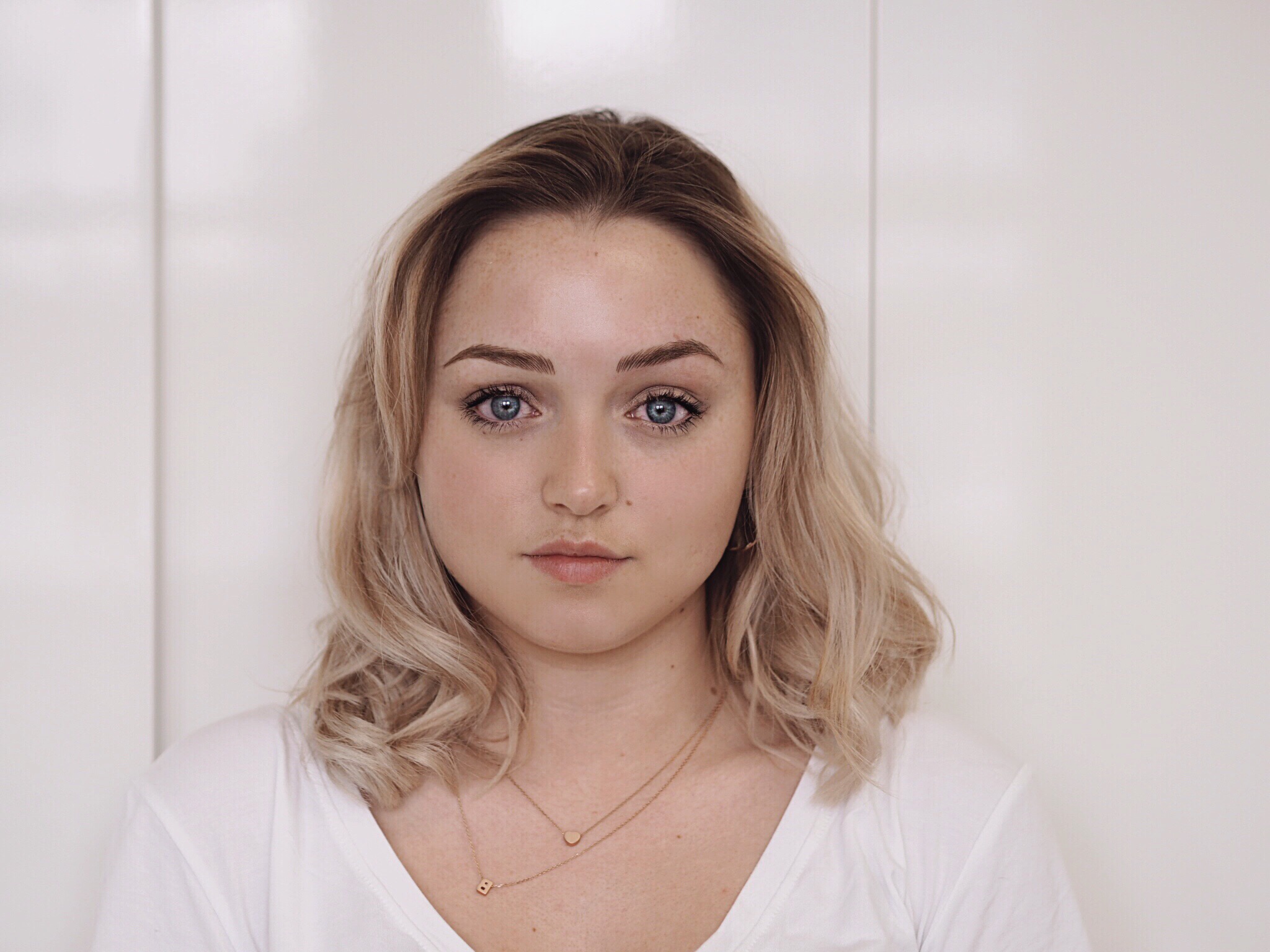