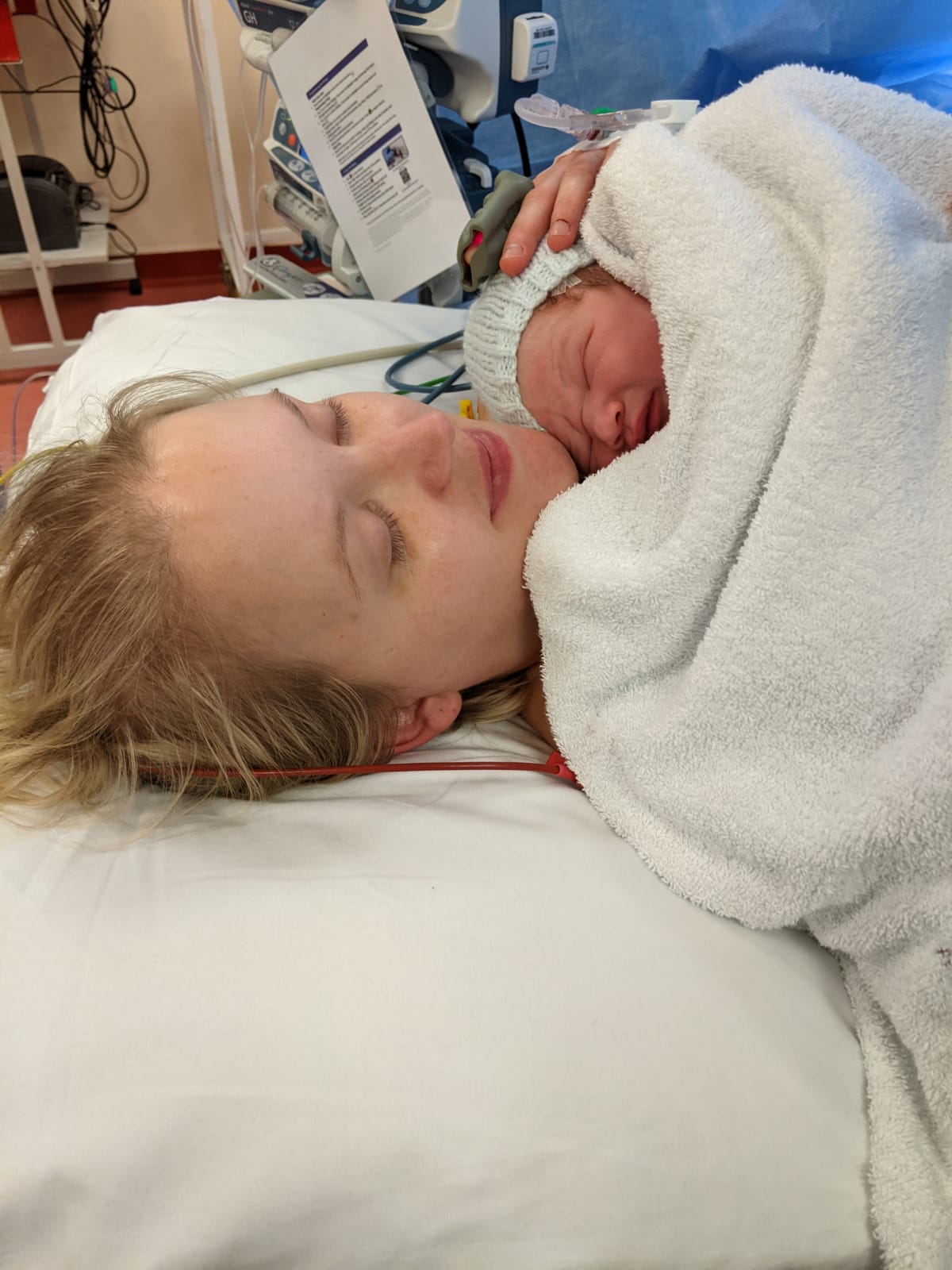 If you’re pregnant, you’ve probably heard of pre-eclampsia, but do you truly know what to look out for and have you heard of HELLP syndrome? Rose’s pregnancy was straightforward. Her biggest stress was working for the NHS as a specialist radiographer during the pandemic – until she was diagnosed with a dangerous condition that she’d never even heard of. Here, she shares her HELLP Syndrome story to raise awareness and encourage other pregnant mums to recognise the symptoms.

In August 2020 I found out I was pregnant. It wasn’t a planned pregnancy, but the initial shock eventually wore off and was replaced with excitement at the prospect of becoming a mum for the first time. I attended my routine scans and midwife appointments, each time the usual checks were done and I was told all was fine – something I came to expect up until my baby was born. I was classed as ‘low risk’ and there were no indications that I would experience any issues during my pregnancy.

This was until I reached 38 weeks when, one morning, I woke up in the early hours with a stomach ache and nausea. I tossed and turned but couldn’t get comfortable and lying on my right-hand side was near impossible. At this point I had reached the stage of late pregnancy where I was permanently uncomfortable – I couldn’t sleep and I constantly ached from the pressure of the extra weight I was carrying. Maybe this was just really bad indigestion? Another one of those typical third trimester symptoms to add to the list of the ones I already had.

I raided my cupboards for some antacids and waited for them to take effect. When my discomfort continued, I rang the midwife triage line to get some advice. I explained my symptoms to the midwife on the end of the phone and she told me it was probably the position of my baby and that I should take some paracetamol to ease my discomfort. So that’s what I did and to my surprise the pain subsided – finally something that worked! But soon enough the paracetamol wore off and the discomfort came back. I had a routine appointment with my community midwife the next day so I was reassured that she would pick up anything concerning. At the appointment, similar advice was echoed – try some stronger antacids and keep taking the paracetamol. Little did I know that the pain I was experiencing was my liver sending out a distress signal – something I wouldn’t be able to ignore for much longer.

A few days later, in the early hours of the morning, my waters broke at home. It was only a slight trickle of fluid so I rang the midwives who advised me to go in for a check-up. They confirmed my waters had broken and I was told to go home and wait for labour to begin. Just as we were about to leave, the midwife asked me if I had any questions. “Yes, actually” – I said – “I’ve been having really bad upper gastric pain for the past week, is this normal?” I will never forget the look on her face; it went from smiling to ashen. She went to discuss my case with the consultant and the decision was made to induce me straight away. There was no discussion of preeclampsia or HELLP syndrome – it was presented as exciting; you’re going to meet your baby very soon!

I had blood taken and my induction began. Slowly my contractions started to build. The doctors then informed me that my blood tests showed that I had pre-eclampsia and something called HELLP syndrome. Pre-eclampsia I had heard of but HELLP syndrome? I had never come across this term during my entire pregnancy or career in the NHS.

As my labour progressed and more blood tests were done, my condition deteriorated. HELLP syndrome stands for haemolysis (H), elevated liver enzymes (EL) and low platelets (LP). Slowly my red blood cells were breaking down, my liver started to show signs of damage and my platelet count began to drop meaning my blood’s clotting ability was reduced.

After hours of labour with very little progress and continued deterioration of my blood markers, the decision was made to undergo an emergency c-section.

The anaesthetist explained to me that, as my blood was no longer clotting adequately, there was a higher risk of the epidural causing bleeding into my spinal canal which could cause a disability. He also informed me I had a much greater chance of critical blood loss during my c-section.

As I was taken into theatre I feared the worst would happen.

Thankfully, at 22:22 on 12th May 2021, our beautiful baby girl, Lily, was born without any major complications.

Following my c-section I was given a magnesium sulfate drip to reduce my chance of having a seizure – something that can occur in those who have pre-eclampsia. This also meant for the first 24 hours after giving birth I was fluid restricted – I have never craved a cup of tea so much!

After 4 days in hospital, I was discharged home and the midwives visited me every 2 days for 2 weeks to check my blood pressure. For some women with pre-eclampsia or HELLP, high blood pressure can remain following birth but after nearly 2 weeks of high readings my blood pressure finally began to lower to my normal baseline.

It was only once I had been discharged from the care of the midwives that I started to read into HELLP syndrome to try and make sense of what had happened to me. When I saw the list of symptoms it seemed so blindingly obvious, why didn’t I spot the signs? Because I didn’t know it existed.

Although I did not initially have the typical markers of pre-eclampsia or HELLP such as high blood pressure or protein in my urine, I still had some symptoms which my midwives failed to spot. I believe that if I had more awareness of pre-eclampsia and HELLP syndrome then I would have had the confidence to escalate my concerns further. Hindsight is a great thing but I am one of the lucky ones and although rare, not everyone – nor every baby – will sadly survive this condition. If you are pregnant or know anyone who is, please share my HELLP syndrome story with them.

READ NEXT: Starting a Family When You Have a Chronic Illness