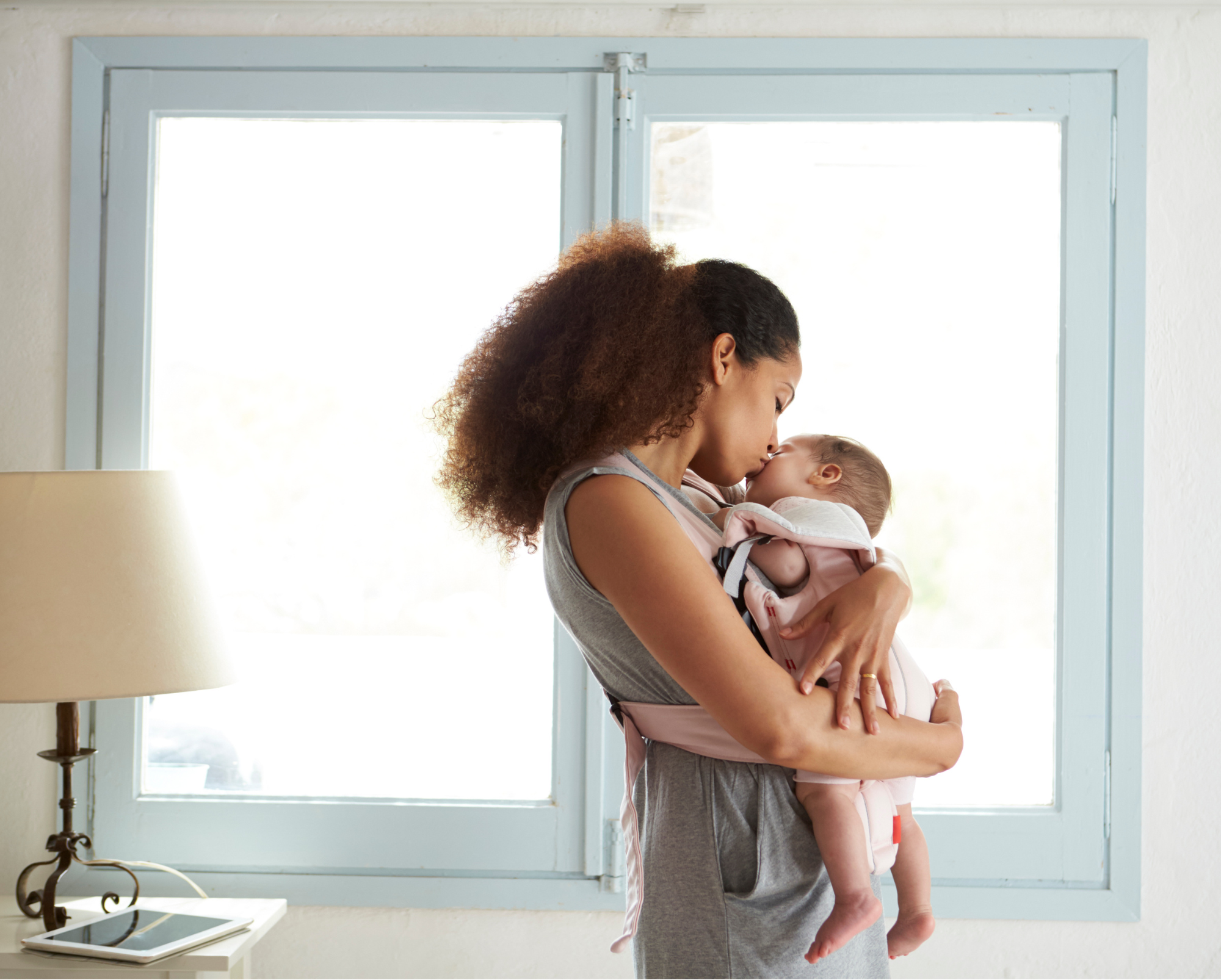 “I Didn’t Feel Like a Real Mum”: Imposter Syndrome in Motherhood

When Amara became a mother, she was expecting that rush of love. She’s written this open, bold piece about imposter syndrome in motherhood to help other new parents who just don’t feel like a mum.

I waited for that high, that feeling, that rush of love, those instincts. But they never came.

I waited for that high, that feeling, that rush of love, those instincts. But they never came. Exhausted, both physically and mentally, I had to start my new role. ‘Mum’.

It wasn’t the easiest of rides. A confirmed low lying placenta shattered dreams of a natural water birth and a calm, midwife led atmosphere. Two ante-partum haemorrhages, an emergency c section and a post-partum haemorrhage later, my mind and body were in a fragile state, but I’d always been one who liked a challenge.

The trouble was, I was no longer one, I was two.

As the curtain lowered and our baby boy was shown to us I burst into tears. A release I guess of all the stress and tiredness – and just happy it was over. Too weak to hold him, I became well aware I was already missing these vital ‘firsts’ that all new mums talk about. The skin to skin, the new-born smell, the oxytocin rush.

We were transferred to the postnatal ward shortly after and my husband was made to leave. It only felt like five minutes ago that my baby was born and already my security blanket was being pulled from me, leaving me freezing. The other parent sent home, when I was already running on empty.

Amongst the noise, lights and doctors coming in and out, I felt an eerie sense of calm. This new human sleeping on me, I was too afraid to move for fear of interrupting a blissful moment.

‘Should I be feeling something?’ I felt nothing.

I knew I had a job to do: care for my new baby. But it felt much more like a need – an expectation – than a want. I didn’t have an urge to soothe him or talk to him. I was happy for him to just sleep. I heard a lady next to me gently shushing her baby. Mine was crying too, so I copied. It hadn’t come naturally to me, but imitation had.

With a c section comes a complete reliance on those around you for those first hours and sometimes days. Unable to tend to simple needs of nappy changes and cuddles, I’d look helplessly to the cot from my hospital bed as I pressed the call button, feeling scared and awkward even asking for help for such simple things. An overworked midwife came in and I made small talk and apologised. Of course nobody minds, but I did. I felt helpless, anxious that I wasn’t doing enough and judged.

I used every spare minute to express colostrum. This tiny human needed me and my sole purpose was now to fill as many syringes as possible. My motivation wasn’t to feed my child, it was to get as much colostrum as I could, like a contest with myself.

Looking back at this time I can now understand a huge part of it came from sleep deprivation.

Expressing gave me an excuse not to hold him, or cuddle, or change his nappy because I already had my hands full. When the  colostrum finished, pumping started. I became obsessed with ounces; heartbroken at checking the pump after 20 minutes and seeing just 10ml. It was like mental torture: I couldn’t even do this task.

I was good at playing a role. But in reality I was drowning.

I kept telling myself that things would be different when we got home. But they didn’t change. The house felt cold, strange and different. I’d almost forgotten how it was to live there and had a feeling of being completely out of my depth. In those early days I was crying every few hours. For no real reason. Anything could set me off. I’d been prepared for the hormones, but were they supposed to last this long?

Every day I would smell his head. I never ‘got’ that newborn baby smell. My husband did, everyone around me did. But not me. Was I broken? Why couldn’t I smell it?

I would say to people, “he just doesn’t feel like my baby, I can’t get my head around the fact that I have a baby”. They would laugh and assume I was just a new mum adjusting. It was more than that.

I felt like he could be taken at any time. Like his real mum was going to come to the door one day and say “thanks for looking after him, I’ll take him now” and I’d just hand him over and think “ah yes, that makes sense.”

Our health visitor would come round and I’d be “fine” – I was good at playing a role. But in reality I was drowning.

Being self-employed, I was still working and feared losing my business if I took a break. I had no family support around. My husband was doing all of the household duties and half the night shift, soldiering through whilst blissfully unaware that I was dying inside.

Imposter Syndrome in Motherhood: “How long have you felt like this?” she asked. “Every day.” I replied.

I was a shell with nothing else to give. I felt incapable of normal emotions, only crying to him behind closed doors with no real reason as to why. Then one day, the bricks of my self-preservation wall started to crumble. I broke down to the health visitor. She asked if I was okay and the bricks turned to dust. I shook my head through tears. “How long have you felt like this?” she asked. “Every day.” I replied. I will never forget the look on my husband’s face.

I knew I had triggers. The hospital, anyone touching my stomach, hearing a baby cry. I thought it would go away in time. But I’d lay in bed awake at night, reliving, rethinking and even typing out my birth story. Trying to find any sense in why I was feeling this way. Like I could find a golden nugget and have an ‘aha!’ moment and fix everything. I was desperate to adore my baby, to feel like a mum.

I’d heard, read and even had imposter syndrome during my time at work, but I was unaware you could have imposter syndrome in motherhood. It suddenly started to make sense that that’s what I was feeling. I was an imposter. This wasn’t my baby; maybe I was never pregnant. I kept asking my husband “does he feel like he’s yours? Do you feel like a dad?”  I genuinely didn’t feel like a mum. I couldn’t get it into my head that this baby was what was in my belly a few weeks earlier. That he was those little feet I’d feel kicking me in the ribs, that he was behind all those pesky hiccups in the middle of the night.

A glimmer of hope

I guess writing this is a form of therapy in itself. I hope it’s a glimmer of hope to those reading who might be feeling the same. Time heals almost everything.

I read about a woman who had felt similar and then one day, it suddenly hit her all at once. I was hopeful, waiting for my day. It didn’t come.

What came instead, is lots of days; a gradual and steady feeling of normality. Each day has been a little brighter. There’s still some days when I feel I’m slipping back to old thoughts but there’s also days that I feel a connection. Not the connection I’d dreamed of but a realistic connection for where I’m at. I have so much fun with my baby, I’m obsessed with him and anyone on the outside looking in will see that. It’s just that I still feel like a fun aunt and not a mother. The ironic thing is, I have such a happy baby. Perhaps some of my happiness has been transferred over to him.

For me, my birth wasn’t really the issue. Even though it could be seen as traumatic, I never felt that way at the time. Instead I have postnatal trauma from those missing weeks after.

In case you’re reading this and you’re struggling, here’s what I’d like you to know:

It’s ok that they’ve got reflux

It’s ok to not have instincts

It’s ok to feel bitter about how things happened

It’s ok that you haven’t got that connection yet

It’s ok to dread the night

It’s ok to not text back

It’s ok to ask for help

READ NEXT: I Wish I’d Known About Postnatal Anxiety