Glossier Review: the Highs and the Lows of the Cult Beauty Brand 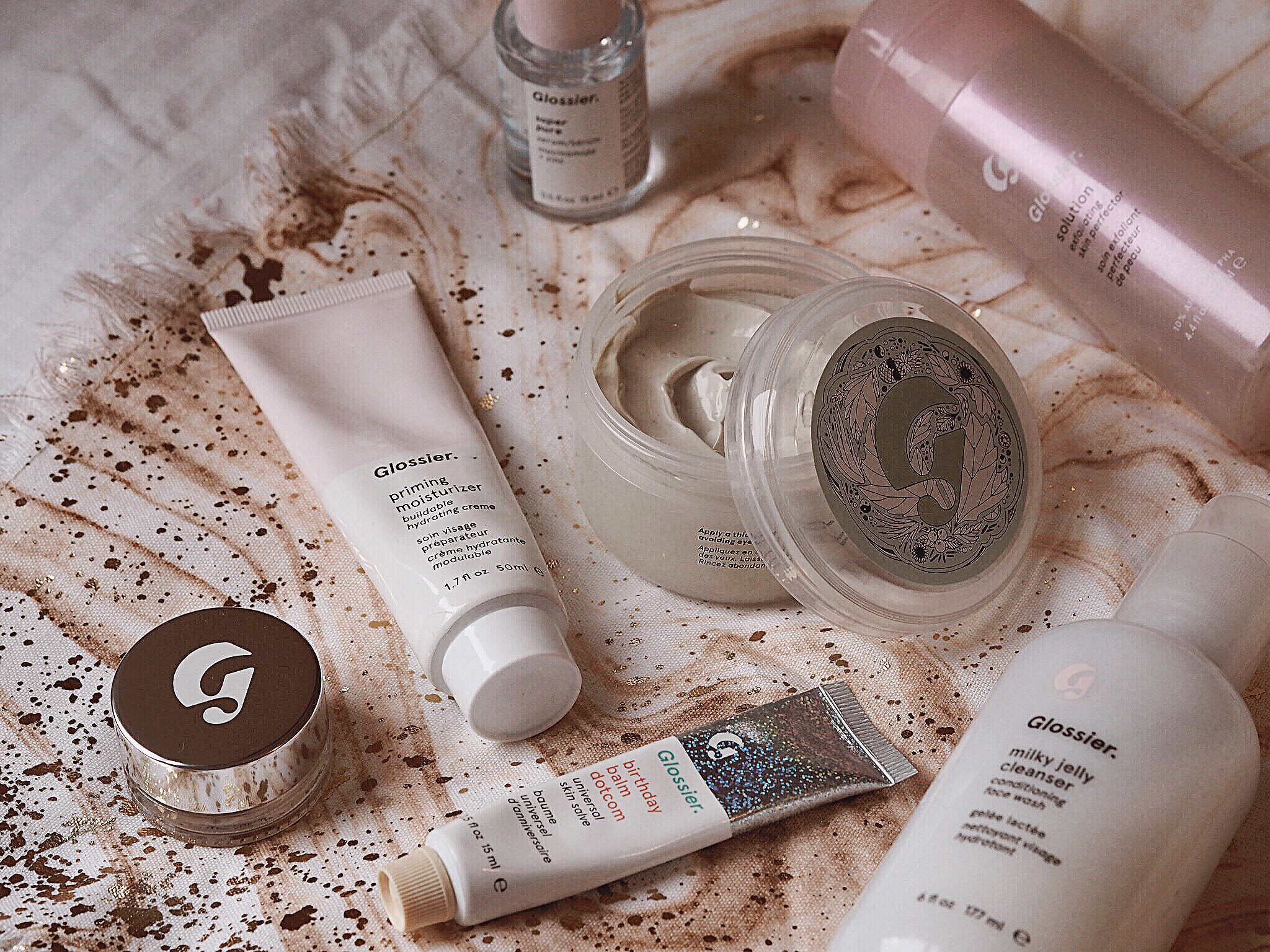 When Glossier announced that they were to be launching in the UK in October of last year, people went a bit nuts. Known for their oh-so-instagrammable marshmallow pink packaging, their gentle skin-care and their ‘hi i just woke up look how cute i am‘ models, the brand has built up a cult-like following of worshipers. But is it actually worth the hype? I ordered all of their hero products purely in the name of research *shady glance* and have been putting them through their paces over the last month or so (which is the minimal length of time I’d ever use a beauty product for before writing a review just FYI). Some are ace, some are utter shit. Here’s what I thought –

The link at the end of this post will automatically give you 10% off at the checkout if it’s your first Glossier order. I do get some credit on my account if you use my link and my face will be v v grateful for this. 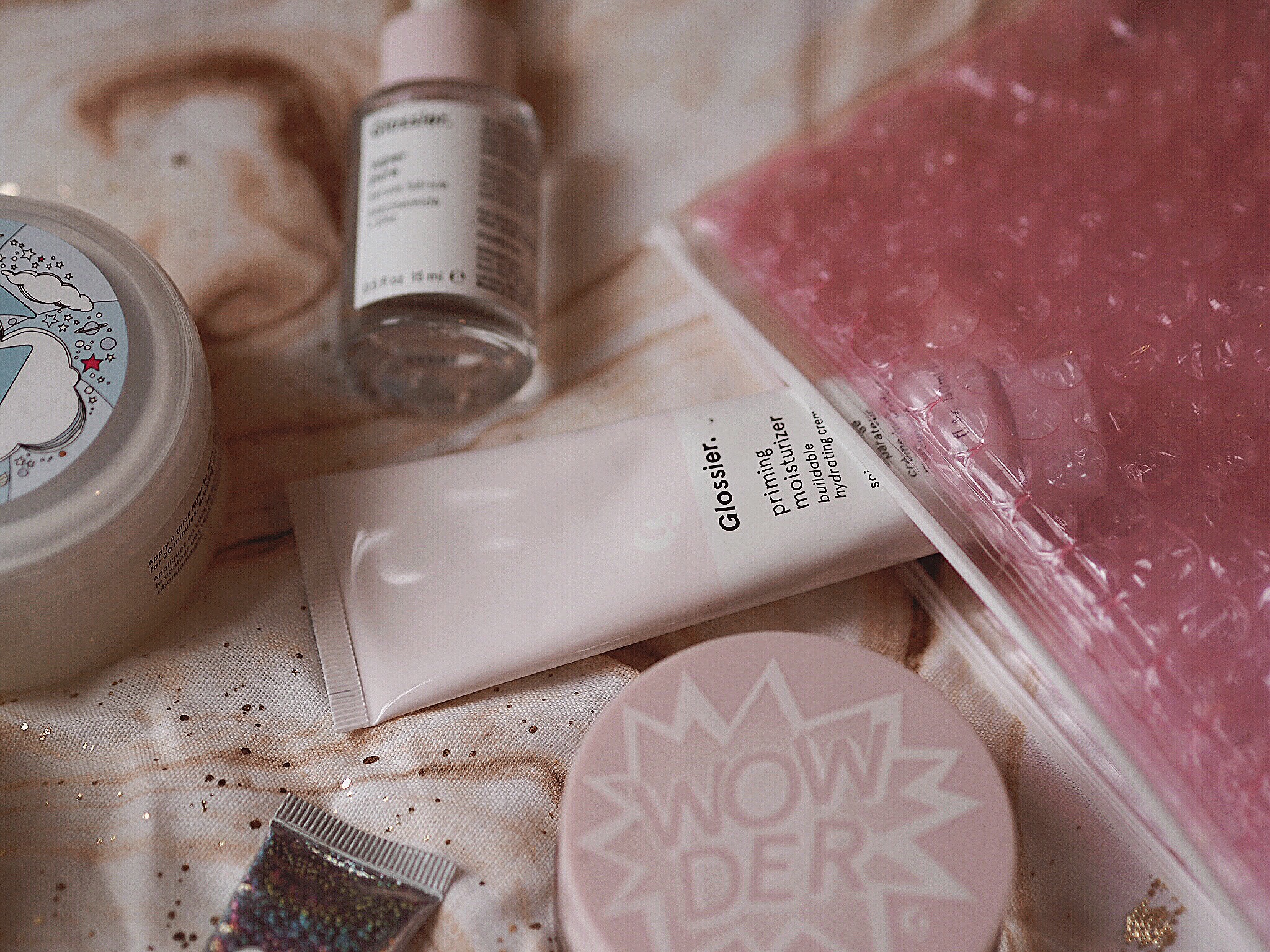 The Glossier skincare line is, on the whole, very basic, but that isn’t necessarily a bad thing. If you’ve got good skin and you wear little to no make-up then Milky Jelly Cleanser is probably perfect for you. If – like me – you’re a sucker for waterproof mascara and a bit of war paint here and there then you’re definitely going to need to use an oil or balm based cleanser first. The formula is creamy and gel like and is genuinely pleasant to use; it leaves the skin soft and supple and although I don’t think it can lay any dramatic claims to necessarily improve your skin, you can rest assured it’s not going to damage it either.

How I Used It: I use Milky Jelly Cleanser as my morning cleanse when I don’t need to worry about removing make up, I just want to clean and freshen up ready for the day ahead. It would also make a really nice second cleanse after a stronger product.

Repurchase?: Yes. Milky Jelly Cleanser has become a staple in my day to day routine!

Thick, waxy and incredibly hydrating, Balm Dot Com is basically the ultimate multi-purpose salve. I was a bit surprised to begin with by just how dense the formula is but a little goes along way and I’ve found myself layering it on (and around!) my lips every night before bed. Once, in the dark depths of winter I found myself slathering it over my nipples. Glittery areolas that smell like birthday cake are definitely the way forward. It comes in six different flavours; original (fragrance free and un-tinted), birthday (vanilla and shimmery), rose (pale pink), cherry (flavoured, sheer red tint), mint (minty and cooling, un-tinted) and coconut (flavoured, untinted). It’s not the cheapest lip balm ever but I can’t see it running out for a long time!

How I Used It: on my lips every night as part of my skincare routine, and on extra dry skin (or nips, lol) as needed.

Repurchase?: Yes. I’ve got my eye on the Coconut one next… 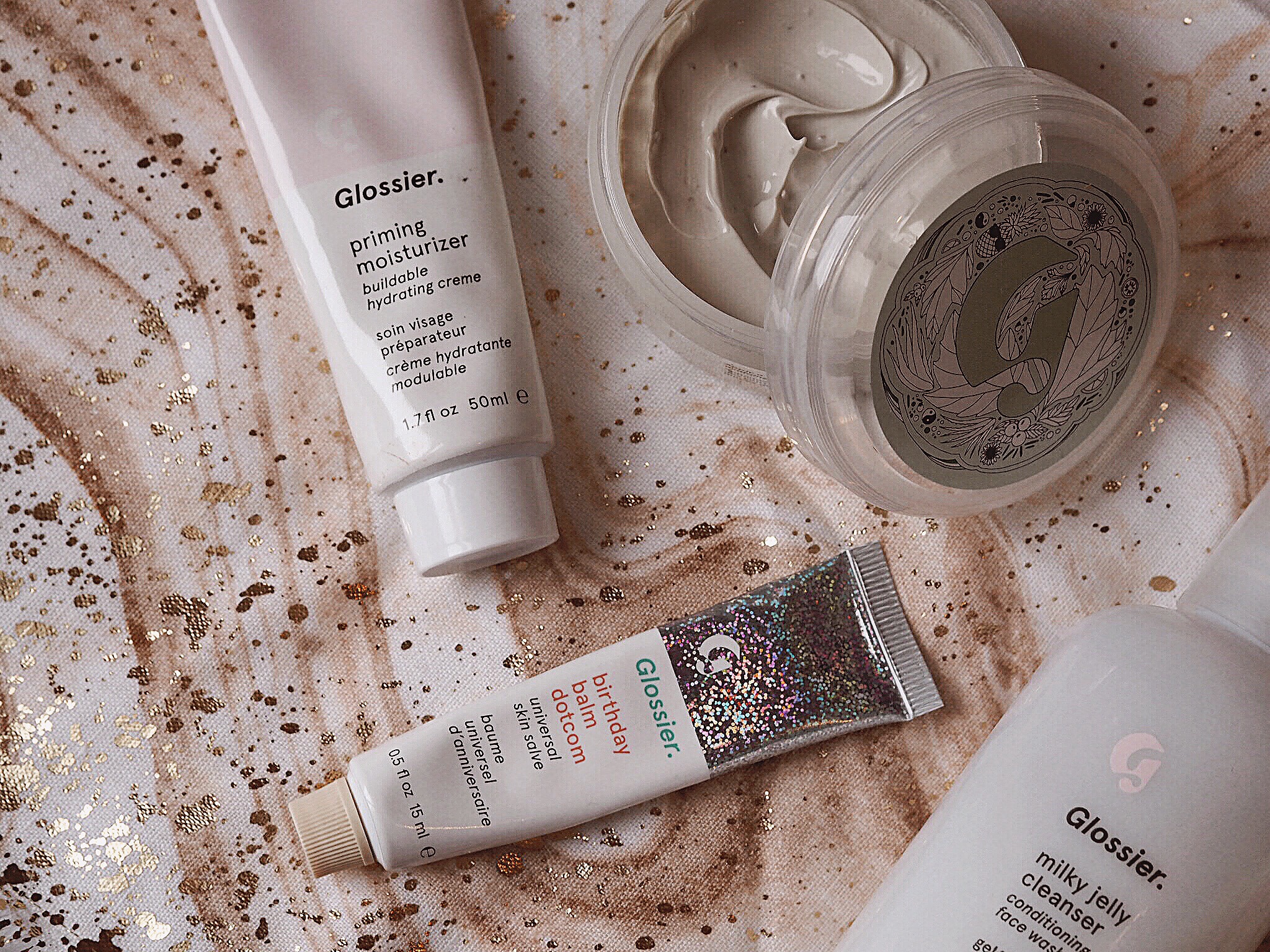 I was really keen to try Super Pure and honestly, I feel like a bit of a mug for getting drawn into the hype without doing any real research first. It’s not so much that I have any major complaints about this product as such, rather The Ordinary version is literally a fifth of the price for DOUBLE the size. So yeah, you’d be pretty silly to buy this product.

A quick overview nonetheless: it’s a niacinamide and zinc based formula that promises to reduce redness and blemishes. For some very questionable reason, Glossier does not share the exact proportions within this solution, unlike The Ordinary who have literally called theirs ‘10% niacinamide and 1% zinc’. It’s a bit stickier than The Ordinary version and I found myself having to wait longer before being able to put other products on after. My skin didn’t noticeably improve and actually around the time that I introduced this and Solution into my routine, my skin broke out really badly.

How I Used It: After cleansing but before moisturizing before bed!

Repurchase?: No way. If you’re interested, try The Ordinary version instead at £5 for 30ml!

Like the cleanser, Priming Moisturizer is a gentle and not necessarily anything to shout from the rooftops about, but it does leave the skin feeling supple. It absorbs well so it’s a good pre-make up option, which I assume is why they refer to it as ‘priming’. It claims to have anti-redness properties but if I’m being completely honest I think that’s probably a load of bollocks. I didn’t find that it made any noticeable changes to the skin surface – so the ‘pore minimising’ and ‘skin tone evening’ – assertions are probably not worth paying any attention to either. What is does do (well, I might add) is moisterise your skin.

What Glossier does do really well is packaging and I really liked having moisteriser in a tube rather than a tub, that aside, it’s a no-frills face cream in a pretty packet.

How I Used It: In the morning after cleansing before make up. I also tried it as a night cream but didn’t find it rich enough (there is a Rich version, however)

Repurchase?: No. It’s not that I didn’t like it, I just found it a bit meh. I’ve since replaced it with Avene Expert. 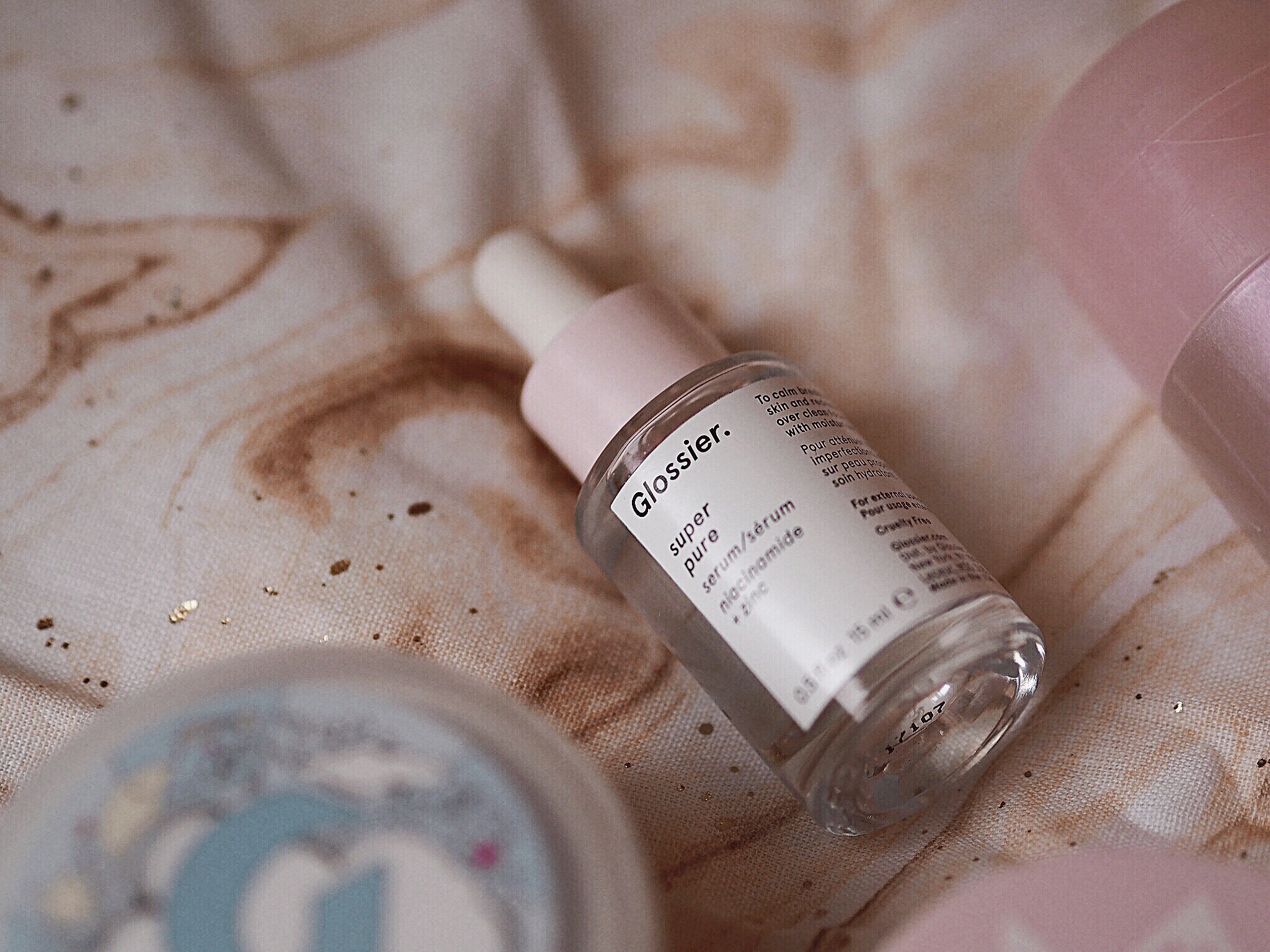 So. Where do I start? I so wanted Solution to be good. I climbed all aboard the hype wagon and bought two bottles on the day it was released. I saw the before and after photos they spammed their Instagram page with and decided that it would absolutely turn me into a glowy goddess. Did it? Uhm…only if your idea of glowing is sore, red spots. Yikes.

I used Solution for about two weeks before giving up on it in a total huff. My skin had broken out, but not in a way I had ever experienced before. Whereas usually I get the odd hormonal chin spot, I found that deep, angry lumps were appearing ON MY CHEEKS. I don’t think I’ve ever had a spot on my cheek before in my life?! They weren’t like your average pimple and they actually hurt. I can’t explicitly blame Solution but if I had to put my money on the cause lets just say I’d be throwing it some shade.

I put up a tweet asking if anyone else had been experiencing similar and lots of responses varying from ‘NO I LOVE IT‘ to ‘I’m going to the doctors on Monday because it’s burnt half my face off‘. I was also linked this article by Caroline Hirons (can you tell I fancy her a bit) and I was pretty shocked to read about the ingredients list and the un-fathomed claims.  If you’re in need of some acid education then Caroline’s your gal and her cheat sheet will teach you all you need to know.

How I Used It: Once a day on a cotton wall pad after cleansing but before moisturising

Repurchase?: Absolutely not. In fact, I’ve got two bottles going to waste…

Believe the hype. I’ve always used a brow gel, previously trusting in Benefits Gimme Brow as a hair definer after using a pomade. Boy Brow honestly do not need another product alongside it. If you want a super ‘done‘ look then this works best as a last step, but for a day to day fill and groom it’s perfect on it’s own. Plus, Beyonce wears it.

How I Used It: on it’s own for a natural, more filled brow, or over a pomade for an extra groomed look.

Repurchase?: Absolutely! I’ve recently had my brows microbladed so my need for products is non-existent right now, but I know I’ll be reaching straight for this whenever I do need a tidy up. 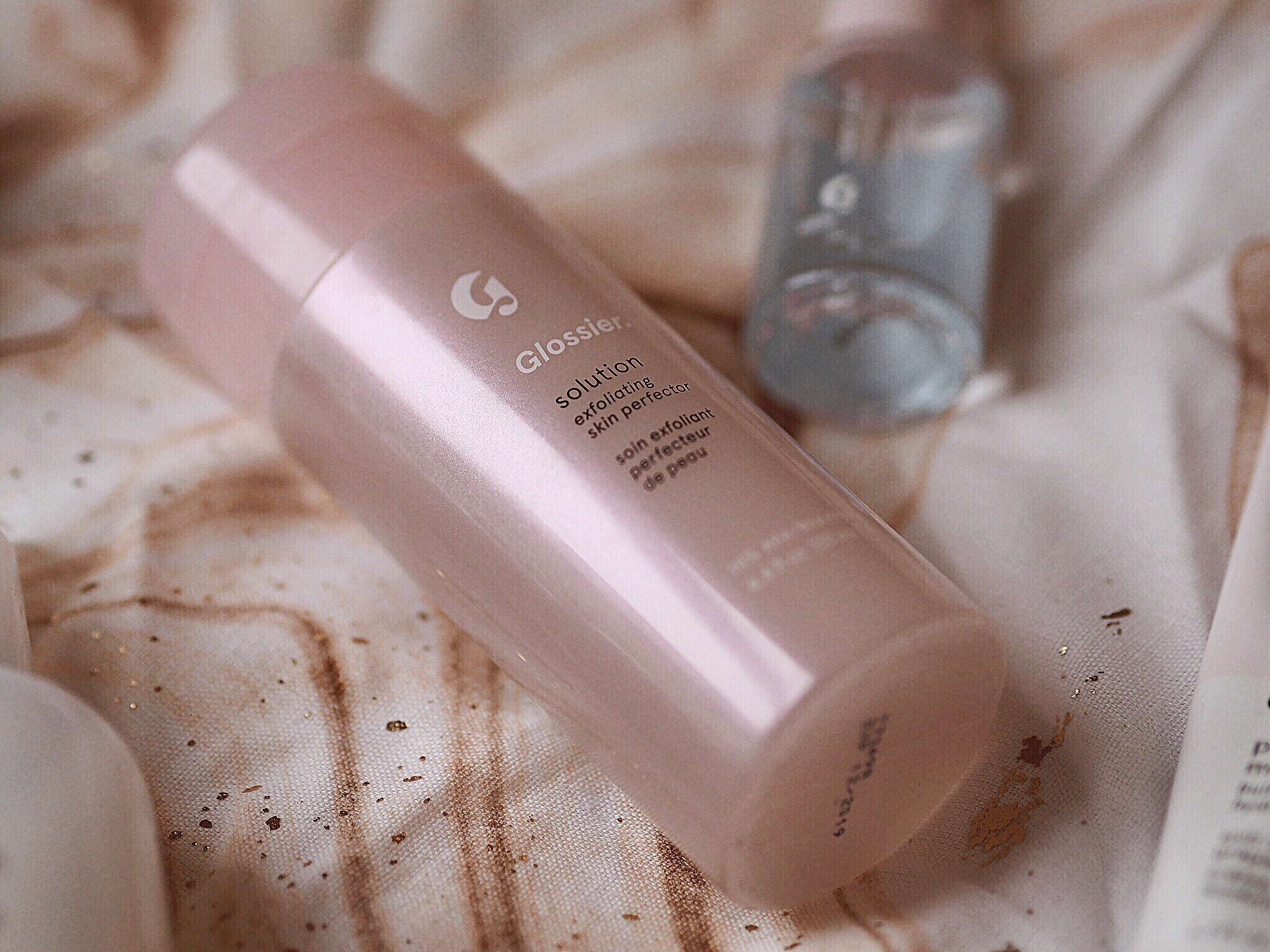 Like all Glossier skin make up, Wowder is very sheer. As such, it means that it really is light and weightless and doesn’t feel at all clogging or drying. On heavier make up days I used it a bit like a tinted setting powder over my usual stick foundation, or on the occasions when I had approximately 38 seconds to throw things at my face before leaving the flat, I used it on its own. I was really pleasantly surprised with the nice even tone it gives and it stays throughout the day. Like all loose powders, I find the pot a pain in the arse.

How I Used It: As a setting powder or for sheer coverage

Cloud Paint might be Glossier’s most iconic make up product. A highly pigmented gel-cream formula, it blends seamlessly into the cheeks to add a touch of colour. You seriously only do need the tiniest amount or you may risk looking like a clown. It comes in 4 shades: puff, haze, dusk and beam – of which I have the latter two. I don’t find myself using it every day because I’m so accustomed to Bobbi Brown’s Pot Rouge which does a similar job but it definitely does give a lovely dewy pop of colour.

How I Used It: on top of base make up, but before highlighter

Repurchase?: Maybe. I can’t see myself getting through these for a while but they are genuinely good. 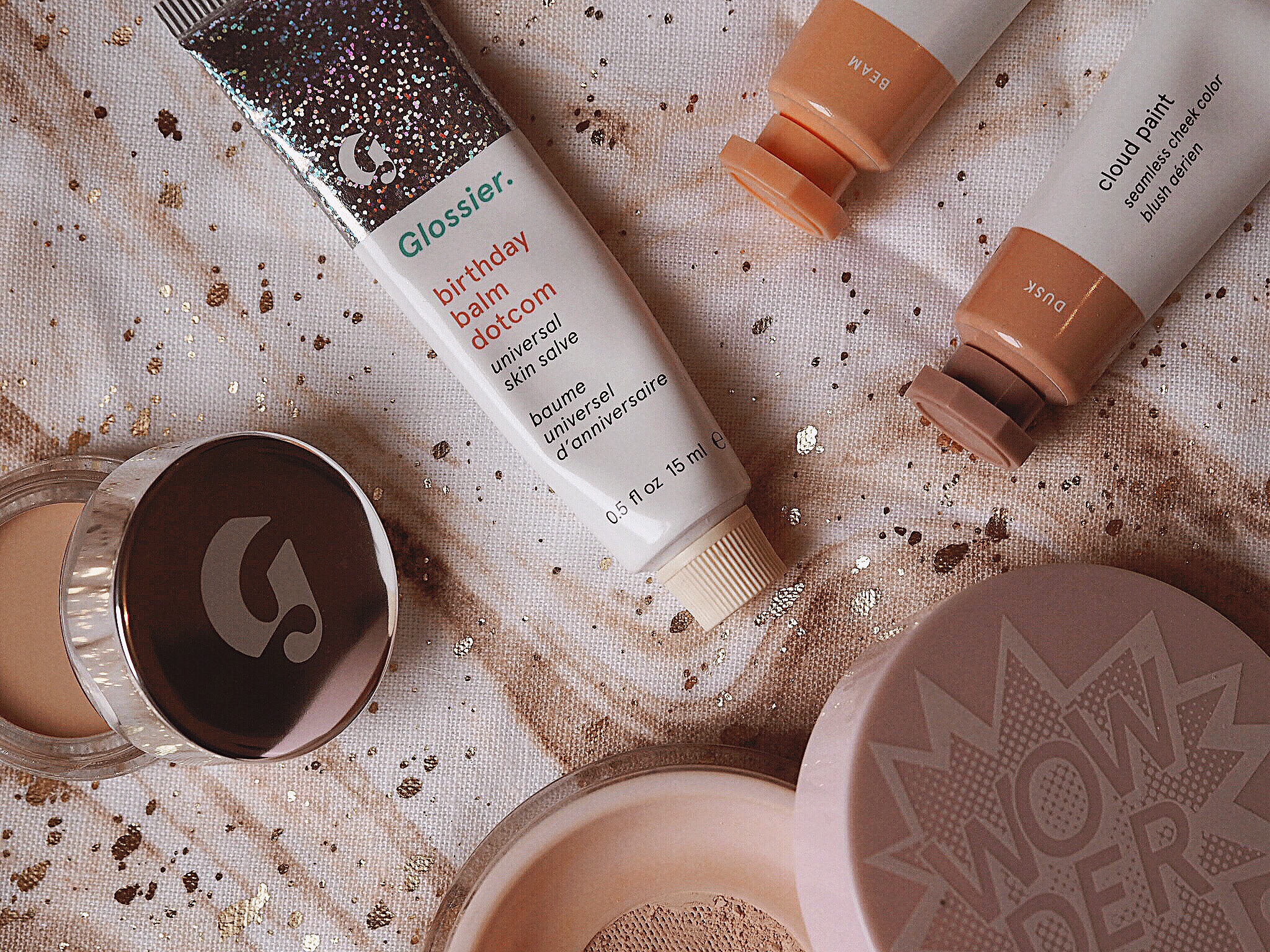 Stretch is the only concealer I’ve ever used that hasn’t creased under my eyes. That being said, the coverage is very sheer and if you’ve got particular bad dark circles you would definitely have to spend some time building it up. It’s branded as ‘flexible’ and I can see why because the creamy formula blends really easily and seems to mould to the contours of the skin rather than sitting on top of it. Brownie points! For blemishes I prefer to use Bobbi Brown Instant Full Coverage concealer.

How I Used It: under the eye area before foundation

Despite the gimmicky names, these masks really are genuinely good and as an absolute mask junkie (I’ve tried everything from the £80 a pot-ers to supermarket peel offs) I should know. Glossier recommend you start with Mega Greens and follow up with the Moon mask, which is very soothing, but if you’re only going to realistically use one then make it the Mega Greens; its creamy, it dries evenly and it leaves the skin soft. I use it weekly!

How I Used It: weekly, in the bath and washed off with Milky Jelly Cleanser. 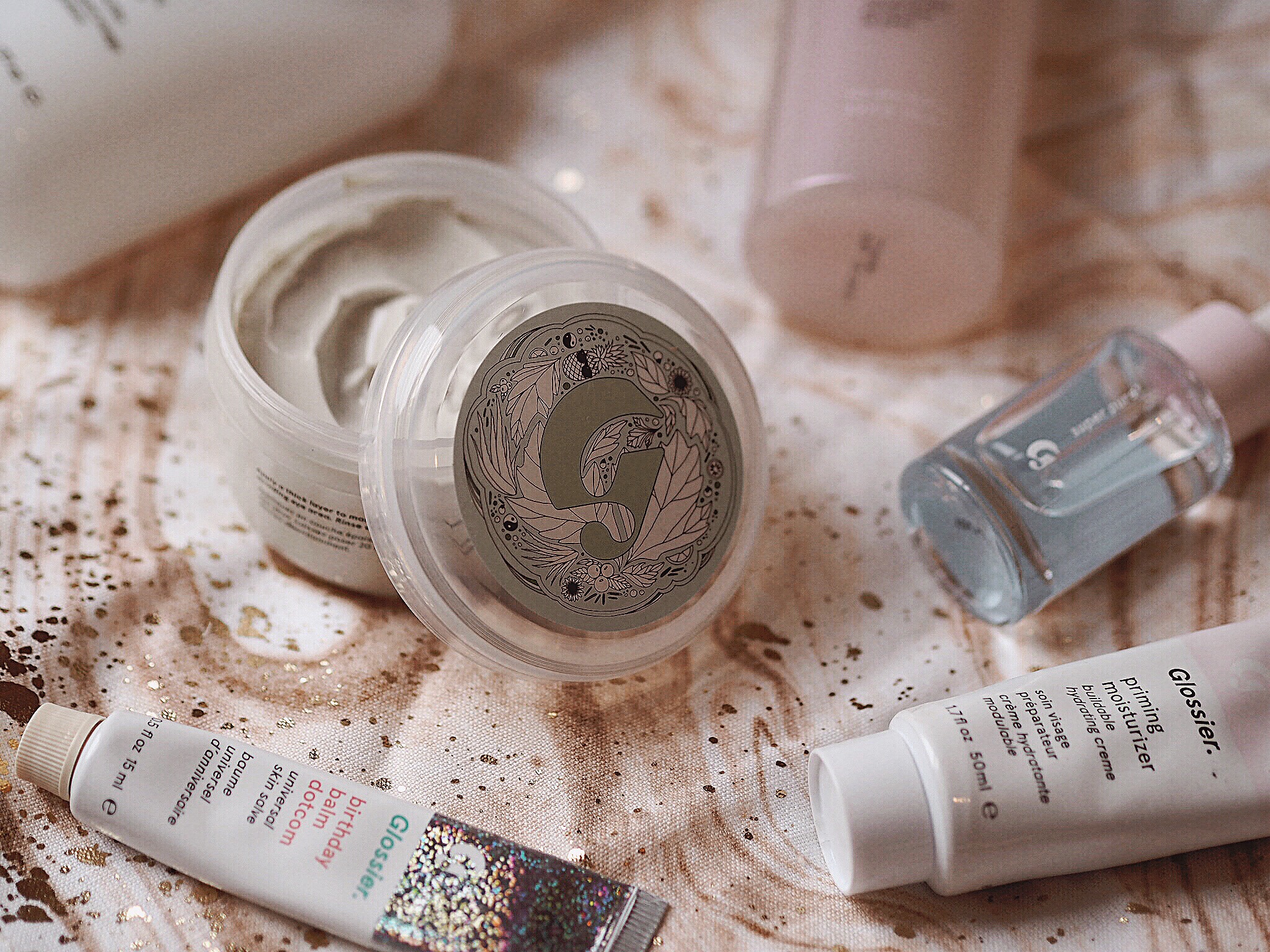 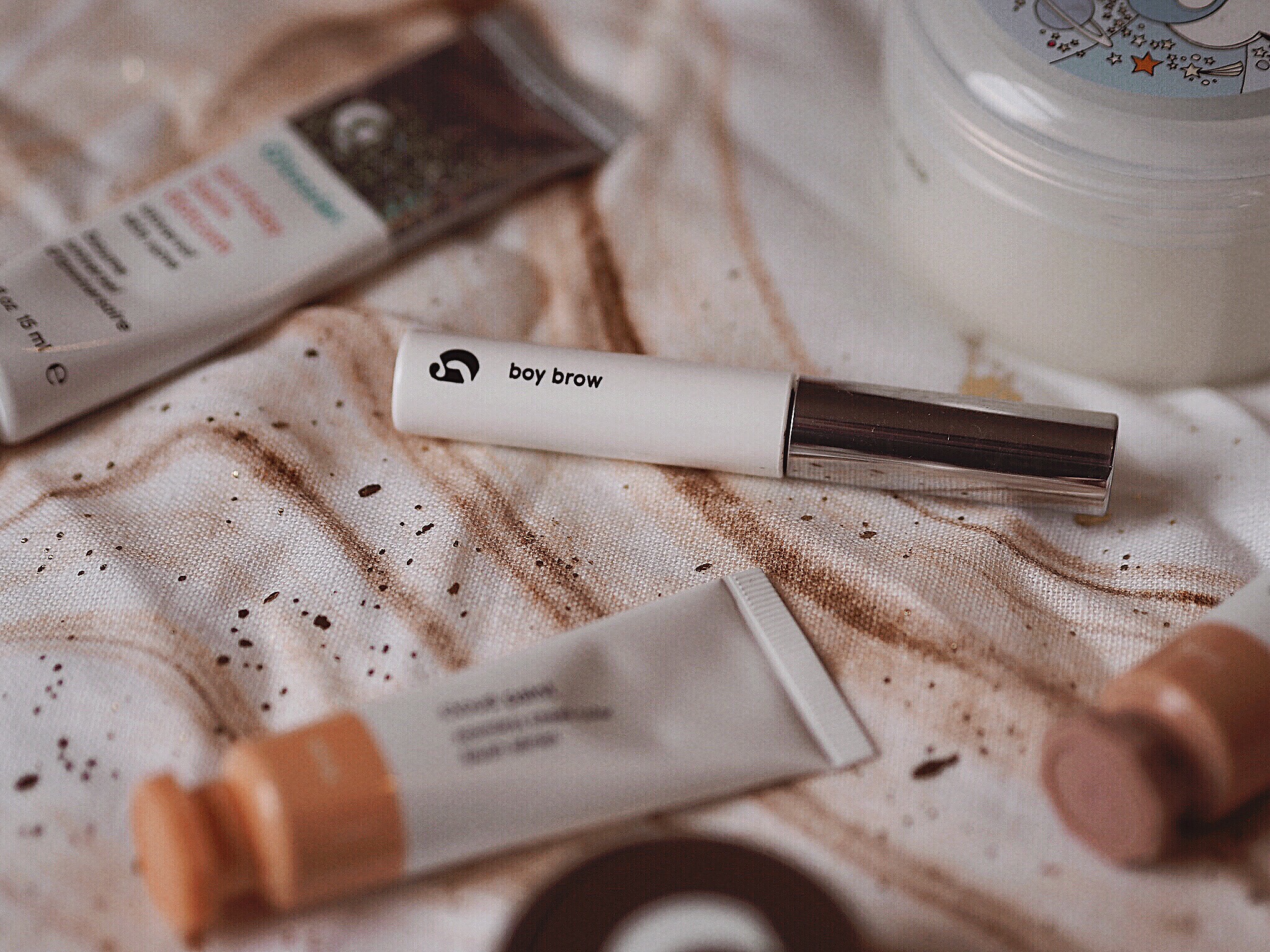 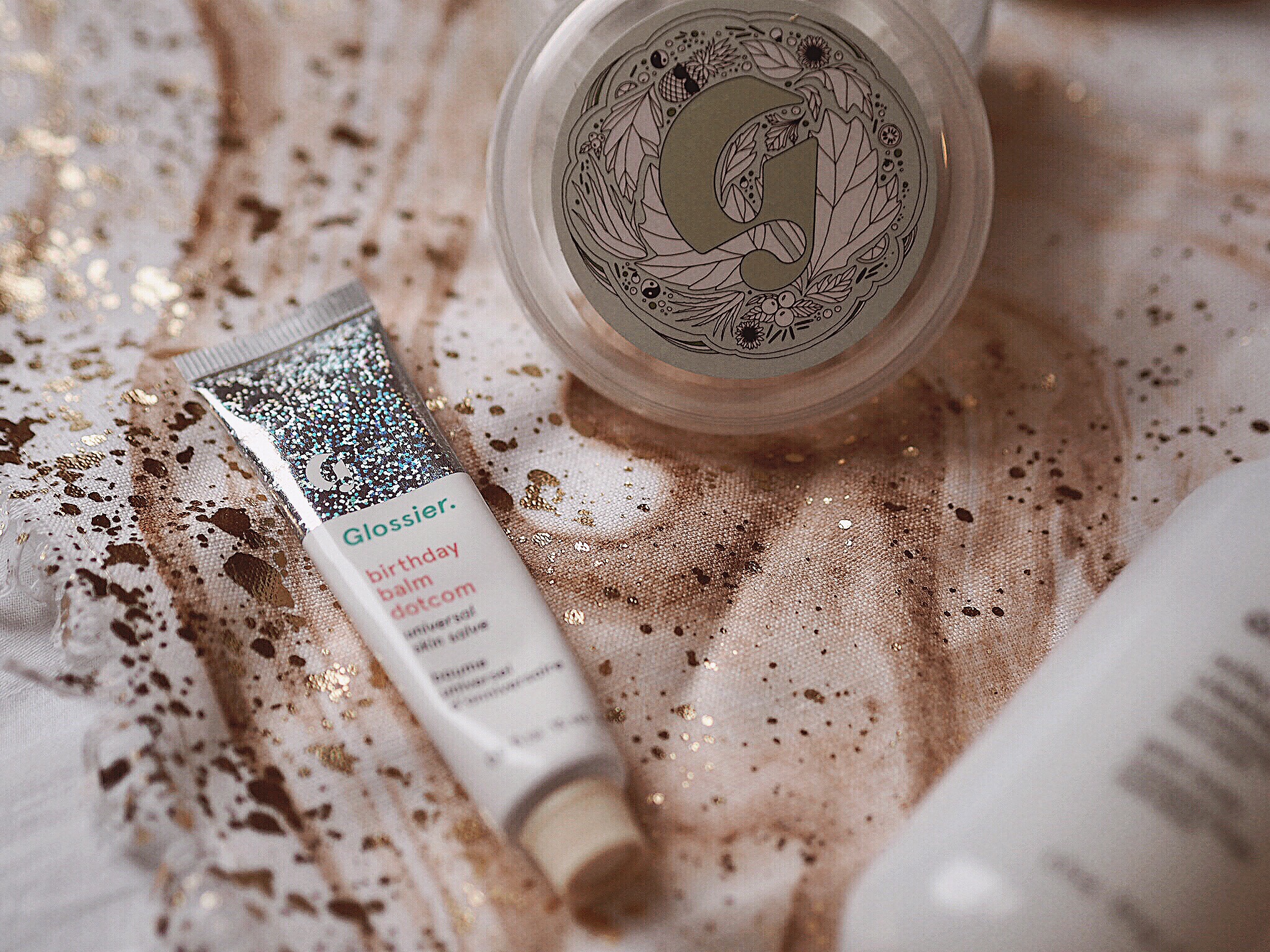