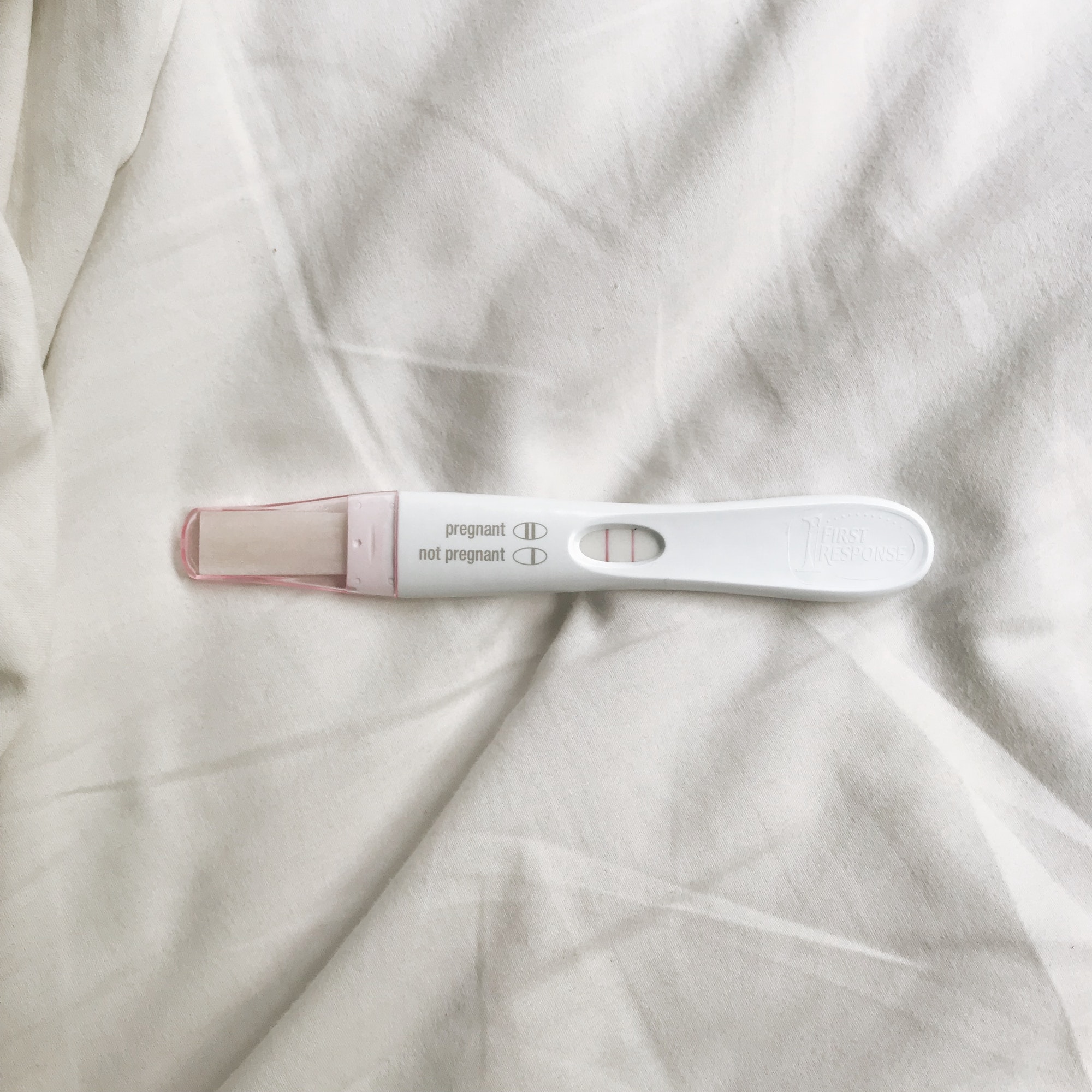 The first 13 weeks of pregnancy – the first trimester – is, I think, the hardest. There’s a lot of worry involved, often a lack of support and the future feels very fragile. It can also feel very exciting! Physically, the first trimester is incredibly draining without the satisfaction of a gorgeous bump or a happily kicking baby that the later trimesters bring. Before writing about my first trimester I wanted to write about getting through it from the perspective of pregnancy after loss: you’ll find that piece here. Whilst I can’t possibly remove that element from my first trimester journey, I did want to separate them out as blog posts in an attempt to look back on those first 3 months without focusing solely on the torment I felt. They read nicely side by side for a full picture!

Finding out I was pregnant

I took a test on a sunny Saturday morning in August. I didn’t actually know I was pregnant when I took it – at least not consciously anyway – but if I were to be really honest with myself I probably had been ignoring small signs in the week or so before. My boobs were sore and the smell of my husband’s smoked salmon sandwich made me leave the room.

I took a test because some random inkling told me I should; we were going for a pub lunch that afternoon and I wanted to know whether to drink or not. I’d woken up hungover after too much wine in the sun the day before. That’s an element I wasn’t sure about sharing for fear of judgement, but so many women continue to drink and behave as usual right up until the moment they find out they’re pregnant and it can then lead to a lot of extra “did I do something wrong?” worry and stigma. I stressed about it briefly but was reassured that almost every doctor will tell you not to worry about this, it’s so incredibly common. Having done everything ‘right’ previously, including cutting out alcohol well before a positive test, I was also of the mindset that the health and outcome of this pregnancy was certainly not yet up to me or what I did or didn’t do.

I wasn’t really willing to face the reality following our previous losses and my initial feeling when the two lines appeared was numbness. I go into more detail in this post. Nevertheless, that afternoon I sat in the sunshine drinking an alcohol-free beer outside a pub and the first seeds of hope began to very quietly plant themselves.

I didn’t have any sickness whatsoever during my first trimester. “How sick have you been?” is often one of the very first questions people ask and it’s a narrative I’d love to change. The idea that every single pregnant woman experiences sickness is false, and even more so, the idea that sickness equals a strong pregnancy is incredibly toxic (and again, false). I really, really don’t envy women who have a horrendous time with it, but in that moment I was wishing it upon myself. Desperate to ‘feel’ pregnant, desperate for a sign that everything was going to be okay. The reality is that nausea wouldn’t have actually provided me that but still, I found myself frantically Googling whether it was alright not to be sick. “You’re just lucky!”, I’ve been told since, but I didn’t feel it at the time. I’ve since spoken to loads of women who have had the same concern over a lack of those commonly discussed symptoms and whilst many women do experience sickness in the first trimester, it doesn’t mean there’s something wrong for those who don’t.

My main and only real symptoms of pregnancy in the first trimester was extreme exhaustion and painful boobs. I convinced myself that perhaps I was just making it up, or worried if one day my nipples didn’t feel sore anymore. As a result I spent a lot of time on Google. I cannot recommend strongly enough that you don’t do this; don’t obsessively search every tiny symptom or change, don’t read forums, don’t allow yourself to pin your hopes or fears on some random snippet on the internet that probably doesn’t apply to you anyway. I know it’s hard.

If I were to describe how I felt during the first trimester in a phrase it would be ‘hungover’. Tired, grouchy, in need of a nap and wanting all the beige and all the sugary foods. For me, the mental side was far more taxing than the physical.

To reiterate in case you need some reassurance; my lack of strong symptoms did not mean anything about the health of my pregnancy. I am sat writing this in my 27th week with a happy, healthy baby growing away in my belly.

Eating all the beige

There’s quite a lot of pressure to suddenly make super healthy choices when you find out you’re pregnant. If you can do that, that’s awesome. All I wanted was carbs and sugar and for the most part, I indulged that. I tried to get some nutrients in through things like smoothies but I also did my best not to guilt trip myself about giving my body what it was asking for.

The same goes for exercise; I didn’t really do any. Unless you’re told otherwise, it’s safe to continue to exercise as you were previously during your first trimester. I didn’t stop because I was worried, rather I just didn’t have the energy or inclination. I tried to walk more and stay active but didn’t always succeed!

We never kept this pregnancy a secret. Whilst I didn’t ‘announce’ it until I was 16 weeks, we told our family and close friends literally immediately. I don’t believe in the 12 week rule because it strips away much needed support and implies that before the first scan a baby doesn’t matter as much, or a loss shouldn’t be spoken about. You’ve got to do what’s right for you but where my two pennies are worth, pregnancy can feel very lonely even when you’ve got lots of people around you. Having those close to you sharing in your news can take off a lot of pressure and hopefully offer lots of TLC and support too.

We had a fair few early scans in this pregnancy, both through the NHS and privately. You can read more about them here. For the sake of this blog post, I’ll focus on the 12 week scan as it’s the one that all women are offered, though I personally recommend an early one around 7-8 weeks to everyone. In other countries the first scan is offered at 8 weeks as standard and I think it’s likely a funding issue that this isn’t the case in the UK.

Our first trimester scan was booked for 13 weeks. The sonographer was lovely and immediately we saw baby wriggling around on the screen which we knew meant that as far as a heartbeat was concerned, all was okay. Cue plenty of ugly crying from me. Despite previous scans at 7, 9 and 11 weeks, this was the first time our baby really did look like one! The change in just two weeks was immense. We could see bones and the shape of a little nose and lips. Baby wouldn’t stay still and was zipping around the screen like a teeny Duracell bunny. The sonographer had me vigorously thrusting my hips up and down and shaking them from side to side to try and subdue baby in to a better position for taking size and nuchal measurements.

I was concerned about the results for the latter, which is a part of the Combined Screening Test that looks for Downs Syndrome amongst other trisomies, but she assured us that the reading looked good. This was confirmed when I received a letter from the hospital a couple of weeks later detailing that the probability of any of these chromosomal conditions was incredibly low.

My skin was not happy! I had sore, scabby hormonal spots around my chin. Thankfully it improved drastically when I switched to a Kate Somerville cleanser after being super impressed with their blemish treatment. Have linked below – I really recommend for hormonal skin!

Bloating or a bump?

Most of what constitutes a first trimester bump is just lots of bloating, fluid and gas! Still, that doesn’t stop us sticking our tummies out in the mirror and hugging the space where a teeny tiny human floats around inside. Around 10 weeks I noticed my waistline was definitely thicker, at 12 my clothes felt uncomfortable and at exactly 13 weeks a roundness appeared that had people offering me a seat on the tube.

Everyone carries so differently that even now, I try really hard not to compare. Some people look obviously pregnant by the end of the first trimester and others don’t show for another couple of months.

I was thrilled to leave the first trimester behind! It didn’t automatically alleviate all my worries by any means but it was a huge milestone. I was also pleased that where the first 13 weeks seemed to crawl by, time seemed to pick up and speed up after this point.

Okay, trick title. There aren’t any. Aside from your daily vitamins (folic acid and Vitamin D) you don’t need anything special during the first trimester so don’t panic about needing to spend extra money! If you want to treat yourself, go for super cosy loungewear or pyjamas – perhaps in a size up that you can grow into – for those afternoon sofa sessions. If you do feel nauseous, ginger candy can help. I also switched to a decaf version of my favourite tea as I tend to drink 3-4 cups a day (but still had caffeine in chocolate and other drinks). If you want to get prepared for when the bump does appear, I’ve linked my favourite bits below, including super comfy maternity bras.